Hutter Leads WPT Legends of Poker after Day 1A

Barry Hutter took the overnight lead at the end of the first day of the WPT Legends of Poker after an eventful day at the Bicycle Casino in Los Angeles. 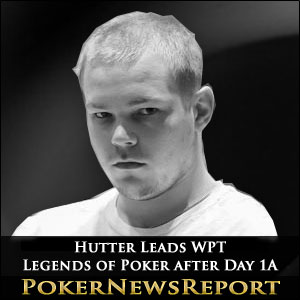 Barry Hutter took the overnight lead at the end of the first day of the WPT Legends of Poker after an eventful day at the Bicycle Casino in Los Angeles.

Hutter, who is 3 for 3 in WPT Main Events after cashing twice at WPT Jacksonville and earlier this year at the WPT Borgata, enjoyed a successful Day 1A in the $3,700 buy-in WPT Legends of Poker Main Event after an explosive start which saw him almost triple his starting stack within the first three levels.

Not a Good Day for the Champions

The World Poker Tour does a steady job of monitoring the performance of former champions, but yesterday was not one of their best days. Champions Club members Phil Laak, Will Failla, Sean Jazayeri, David Chiu, Gavin Griffin, and Freddy Deeb all bit the dust within the ten levels of play and although five former WPT champions remain in the event, it was certainly a day for the small guy.

Unfortunately one “small guy” who did not make it through to the close of play was Martin Oganov, who won his entry into the WPT Legends of Poker playing on the subscription site ClubWPT.com. Oganov might have found it thrilling to play on the same table as Shaun Buchanan, Athanasios Polychronopoulos and November-Niner Ryan Riess, but unfortunately his cards did him no favours and he was bust during Level 7.

The World Poker Tour advertises the Legends of Poker Main Event as having an estimated prize pool of $3 million, and players who were eliminated on Day 1A (or those who finished with a small chip stack) have the option of re-entering today or tomorrow (Day 1B/1C).

However, with only 142 players ponying up the $3,500 + $200 buy-in, or qualifying online for the event, there could be a considerable shortfall in the WPT´s estimated prize pool. 56 players survived Day 1A, with only five on those failing to double their starting chip stack, so it is unlikely that we will see a significant number of players who took part in the opening day of the WPT Legends of Poker Main Event coming back to fire a second bullet.

Hopefully a few more players roll through the doors of the Bicycle Casino this afternoon and turn this event into a genuine legends tournament. Day 1B will consist of ten levels of play from which players will hope to carry forward substantial stacks of chips into Sunday´s Day 2. Those who we are unlikely to see at the Main Events tables until then are:-