The 2011 Macau Millions came to an end over the weekend with China’s Hung-sheng Lin claiming victory after outlasting a record breaking field. The unique format for this tournament allowed… 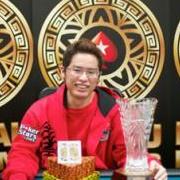 The 2011 Macau Millions came to an end over the weekend with China’s Hung-sheng Lin claiming victory after outlasting a record breaking field.

The unique format for this tournament allowed players to repechage over seven opening flights, potentially cashing on each of those flights. Each day runners were required to play down to the top 7% of the field, with each player guaranteed a HK$8,000 pay day and a Day 2 berth.

Only six players managed to cash multiple times, but even so, the format proved to be very popular with many of the players, with some of the field trying their luck on each of the seven days. When all was said and done, the Macau Millions event attracted 1,329 runners, which exceeded most peoples expectations, and smashed the record for the largest live poker tournament in Asia.

Although the HK$2,200 buy-in tournament was mostly dominated by local players, there were a few recognizable poker pros in the field including 2010 WSOP Champion Jonathan Duhamel, Celina Lin, Raymond Wu and Bryan Huang.

There were 93 players who reached the money and Day 2 of the event, and that was reduced down to just 34 players by the time Day 3 came around. Heading into the final day, Hung-sheng Lin was the chip leader which put him in a good position to accumulate chips as the big stack and to go on to claim the memorable victory.

One of the interesting hands on the final table was during three-handed play. Lin decided to three-bet preflop with A-6 after Germany’s Huy Khiem Nguyen opened the pot. Nguyen made the call and the flop came down A-3-T. Lin bet 850,000 on the flop. Nguyen reacted by moving all-in and Lin made the call with this decent top pair hand. Nguyen showed T-7 and when the turn and river bricked, Lin found himself with a significant chip advantage over Brice Renaud.

After that hand, it was only a matter of time before Lin went on to claim the title after his pocket jacks held against Renaud’s K-6. Lin collected HK$400,000 for his efforts over the last week and he is one of the front runners for Asia Player of the Year.

The next major live poker tournament in Macau is the Macau Poker Cup which is held between May 28th to June 5th. Macau is home to some of the best casinos in the world but if you would like to enjoy casino games at home check out my friends site where he has details of the best online casino games for real money and lots more!