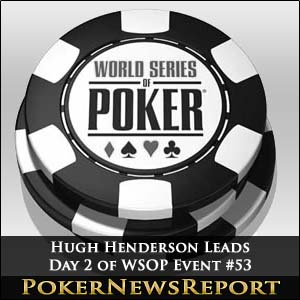 South Carolina’s Hugh Henderson tops the leaderboard after Day 2 of the $1,500 buy-in No-Limit Hold’em event #53 at the World Series of Poker in Las Vegas.

Vicky Coren Bags Up in Fourth

British player Vicky Coren – who is probably best known for becoming the first woman to take down a European Poker Tour (EPT) event – is also in with a great shout of adding a WSOP bracelet to her resume after bagging up in fourth place on 934,000 chips.

Virginia’s Lee Childs – who exploded on to the poker scene in 2007 by finishing seventh in the main event – is one of the better-known pros to survive Day 2 after bagging up in 12th place on 501,000.

Childs picked up much of his chips when moving all-in with Q♦ J♦ against his unnamed opponent’s Q♠ J♥ on a 5♠ K♥ 10♦ A♦ board. It appeared likely that the pot would be chopped, but the 8♦ river gave Childs a diamond flush to see him almost double up and score a knockout.