Four-time WSOP bracelet winner Huck Seed has scored his biggest win since lifting the 1996 $10,000 main event for $1 million, by coming up trumps at video poker! 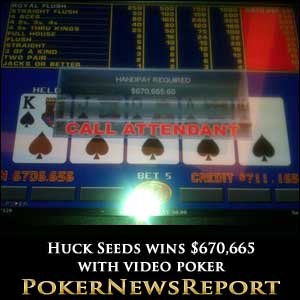 Four-time World Series of Poker (WSOP) bracelet winner Huck Seed has scored his biggest win since lifting the 1996 $10,000 main event in Las Vegas for $1 million – by coming up trumps at video poker!

Online poker might still be tough to find for many in the USA right now, following the Department of Justice (DoJ) decision to shut down several [geolink href=”https://www.pokernewsreport.com/online-poker-rooms”]poker websites[/geolink] on April 15, ‘Black Friday’, but Seed has still managed to win big – and without taking part in a live poker tournament.

The 42-year-old American teased his followers on microblogging website Twitter by announcing that, while, “Internet poker is down in the US”, he was “still pressing buttons!”

Many of the Californian’s fans were suitably confused by this vague piece of information, but were soon filled in when Seed added to his earlier tweet by posting the photograph of the bountiful machine and its on-screen message to call out for an attendant (see above).

Not even the $500,000 he left Harrah’s with for winning the World Series of Poker Tournament of Champions freeroll last year could compete with this latest success.

Prop-betting star Seed – who struggled during this summer’s WSOP when failing to make the money from 23 tournaments entered at a cost of over $200,000 – pumped in about $50,000 during his six-hour session at the $500-a-hand machine, but was most certainly paid back many times over with his massive triumph.

The winning hand? Well, it had to be a royal flush, didn’t it? Of course it did. Curiously, if this huge pay day was added to Seed’s lifetime tournament earnings, he would be standing at well over $6 million.

So, even after a tough time in the Rio All Suite Hotel and Casino a few weeks ago, Seed has most definitely seen his luck change big time. Could this herald a new career for the lanky pro? Probably not, but…