The amateur Michael Rosenbach from Berkley, California would win more than $180k for his efforts in the Heartland Poker Tour (HPT). 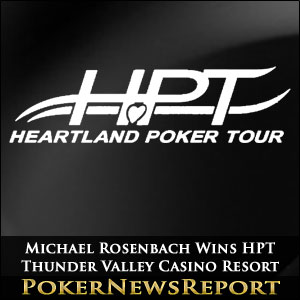 The amateur Michael Rosenbach from Berkley, California would win more than $180k for his efforts in the Heartland Poker Tour (HPT).

The HPT might not be as glamorous as the WPT or draw the same massive fields as the WSOP, but for poker professionals looking to prove their worth in lower buy-in, yet still prestigious, tournaments before moving up to the big leagues, the Heartland Poker Tour is where it’s at.

As exhibited by its expanded schedule and larger fields, the HPT has proven effective at attracting amateurs and pros alike. This week it held its first ever tournament series in Northern California’s Thunder Valley Casino Resort. The event would draw 542 runners and feature a prize pool of $785,610 – modest by other tours standards, but still life-changing.

When the tournament finally ended, local Michael Rosenbach would be the declared the winner and would take home $180,689 for the victory.

Although several big names showed up for the event, November Niner JC Tran and WSOP host Lon McEachern among them, amateurs would reign supreme at the final table.

Andrew Higgins would finish in ninth place, after his Jacks failed to crack Joe Fernandez’s Queens. The next elimination would not take place for 50 hands, when the short-stacked Fernandez jammed with Q-6 only to be looked up by Kirby Nunn’s A-K.

Once again the eliminator became the eliminated as Kirby Nunn would fall in seventh place. Considering Nunn qualified for the tournament via an $80 satellite, the nearly $24k he received should serve as a suitable consolation prize for not finishing first. Loni Bare would be gone in sixth, after getting it all in with a flopped flush, only to be drawing virtually dead.

Kevin O’Donnell finished in fifth and after a long struggle four-handed play finally ended when Rosenbach turned a straight to eliminate the all-in William Chao. The next hand, Yotam Shmuelov would also be finished off by Rosenbach.

The players began heads up play on Hand #146. Rosenbach’s opponent would be Mel Weiner, a seasoned amateur who remarkably finished third at the last HPT Main Event in Los Angeles. Unfortunately for Weiner, second time’s wouldn’t be the charm as after 25 hands Weiner was eliminated in second.

On the last hand of the affair, Weiner limped and the usually aggressive Rosenbach checked the big blind. The flop brought 10♦6♦3♣. Rosenbach bet 200k (blinds 100k/200k/30k) and Weiner called. The turn completed the flush 5♦. Rosenbach double-barreled for 385k and Weiner raised all the way to 2.085 million. Surprisingly, Rosenbach open jammed and Weiner called it off with K♦4♠ – a combo-draw. But Rosenbach, holding the 4♦2♠ already had a made straight and was a huge favorite. The much anticipated river was a lowly blank 6♥.

Weiner received $110k+ for his efforts.

The HPT will now head to the Club One Casino in Fresno, before eventually returning to Thunder Valley this winter.