Howard Lederer Gets Off Light in SDNY Settlement

Millions of former Full Tilt Poker players in the US were left fuming last night after details of Howard Lederer´s settlement with the SDNY were released. 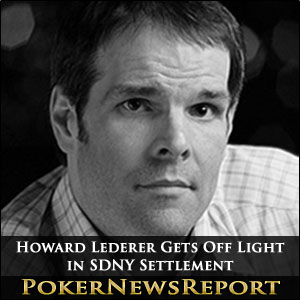 Howard Lederer yesterday settled the civil case made against him by U.S. Attorneys Office, Southern District of New York (SDNY) for a fraction of the $42.5 million it was alleged he had defrauded from Full Tilt Poker players over the years.

Despite contending that he was unaware of any wrongdoing and maintaining that Full Tilt Poker was a legitimate business, Lederer agreed to a two-part money settlement with the U.S. Attorneys Office which includes a money-laundering “penalty” of $1.25 million.

The contents of two banks accounts of unknown value, Lederer´s 1965 Shelby Cobra roadster, two Las Vegas properties with a combined value of approximately $975,000 and an additional $30,000 traceable to the sale of a third Las Vegas property are also to be forfeited in the deal.

The “penalty” and the proceeds from the sale of the Las Vegas properties have to be paid to the U.S. Attorneys Office over the next 36 months, but Lederer will get to keep two Las Vegas mansions (which are being used as security against the deal), property in California and the Wells Fargo bank account where it is believed much of the [allegedly] stolen money was deposited in a personal account in the name of Howard and Susan Lederer.

Reaction to the Settlement

Initial reaction to the agreement was one of shock. The popular 2+2 forum sparked into life with a mixture of disbelief and sarcasm about the way the civil case had been handled and, once word got around that Howard Lederer was hosting a party at his Hawk Ridge Drive mansion in celebration of the settlement, the site went ballistic (Nº 99 Hawk Ridge Drive if anybody wants to go).

Contributors had to be reminded that action taken by the U.S. Attorneys Office was a civil action and not a criminal one, and it is unlikely that criminal charges will now be brought against Lederer or Chris Ferguson – who is next in line to settle with SDNY after an extension until January 28th 2013 was granted to his motion to dismiss the civil action against him.

Lederer´s settlement with the U.S. Attorneys Office is almost on a par with that of Rafe Furst, who settled the Black Friday charges made against him last month for a fraction of the $11 million he was being pursued for by the SDNY. Like Furst, Lederer has also been banned from working in the online gambling industry in the United States until “if and when a change in applicable law takes place making the offering of such gambling lawful in the United States”.

Would you give Howard Lederer a job?