First he “ummed” and “ahhed” his way through 3½ hours of the “Files”, then he rolled into Vegas, and now Howard Lederer has the cheek to claim he is innocent. 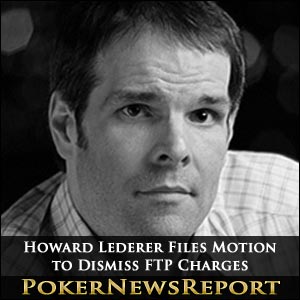 First he “ummed” and “ahhed” his way through 3½ hours of the “Files”, then he rolled into Vegas, and now Howard Lederer has the cheek to claim he is innocent.

News broke today that Howard Lederer has filed a motion to dismiss charges made against him in the case of United States of America v PokerStars et al with the District Court in the Southern District of New York. The case – in which there is a $42.5 million claim against Lederer for money laundering – is being contested on various grounds.

Despite it being alleged (and generally acknowledged) that Lederer cleared off with millions of dollars of Full Tilt Poker players funds, Lederer´s attorneys claim that the motion contains only a few allegations that Lederer actually did anything wrong and none at all that he defrauded FTP clients. They also claim that, as Lederer was not engaged in any unlawful business (based on the Department of Justice ruling that the Wire Act 1961 did not apply to online poker), the District Attorney is wrong to use the Travel Act 1952 to demand forfeiture of Lederer´s assets.

This is the second motion to dismiss that Lederer has filed – having originally asked that the claim against him be thrown out in July 2012. This effort is an updated effort on the original, using the same weak arguments in response to an updated version of the Department of Justice´s second amended civil complaint that included additional allegations against the former Full Tilt Poker board president.