How to Win a PokerStars´ PSPC Platinum Pass in January 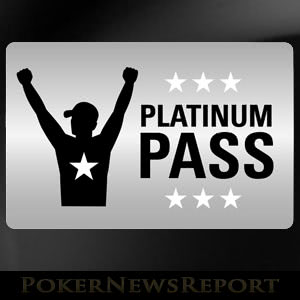 A couple of weeks ago, [geolink href=”https://www.pokernewsreport.com/pokerstars-announces-2019-players-nl-holdem-championship-22045″]PokerStars announced an ambitious plan[/geolink] to host “the richest and most exciting $25,000 buy-in live event in poker history”. The PokerStars Players Championship (PSPC) will take place at the Atlantis Hotel and Casino Resort in the Bahamas from January 6th to January 10th 2019, and will have an anticipated prize pool in excess of $10 million.

To support its ambitious plan, PokerStars has announced it will be giving away three hundred “Platinum Passes” throughout 2018. Each Platinum Pass has a value of $30,000 and includes the PSPC buy-in, accommodation at the resort, and $2,000 towards travel expenses. Players will have their first opportunities to win a PSPC Platinum Pass from next week.

Thirteen Passes Up for Grabs in Live Events

January is a big month for PokerStars-sponsored live events around the globe, and the site is taking full advantage of the opportunity to distribute more than a dozen Platinum Passes in key events. If you have not yet planned your live poker action for next month, you might want to include some of the following venues to improve your chances of winning a PokerStars´ PSPC Platinum Pass in January:

The twentieth Asia Championship of Online Poker (ACOP) takes place at PokerStars Macau LIVE from next Wednesday. The winner of the ACOP Main Event will not only win the lion´s share of the $500,000 guaranteed prize pool, but also a PSPC Platinum Pass.

The best place to win a PokerStars´ PSPC Platinum Pass in January is at the PCA jamboree in the Bahamas. Five passes will be given away to the PCA Main Event winner, the Main Event chip leader at the end of Day 2, the National Event winner, an “In the Money” winner and a “Wild Card” winner.

A cheaper opportunity to win a PokerStars PSPC Platinum Pass in January is at the Megastack event in Co Meath. The €170.00 buy-in Main Event might only have a €30,000 guaranteed prize pool; but with a $30,000 Platinum Pass going to the winner as well, first place is going to be hotly contested.

The PokerStars Festival Tour returns to London´s Hippodrome Casino in January for a packed schedule of events. Three PSPC Platinum Passes will be up for grabs during the festival for the winners of the £500,000 guaranteed Main Event, the London Cup and the High Rollers Event.

The final two PSPC Platinum Passes to be given away during live events in January will go the Main Event winner and chip leader at the end of Day 2 at the Brazilian Series of Poker (BSOP) in Sao Paulo. Expect more than two thousand players to be up for winning these prizes.

Looking ahead, PokerStars has announced a further four PSPC Platinum Passes will be given away during the Macau Poker Cup between 26th January and 11th February. According to PokerStars, the four prizes will be awarded to the winners of the “Main Event, National Event, Cup Event and High Roller Event”. Looking at the schedule, we suggest these are the Red Dragon, Baby Dragon, $25K buy-in and $100K buy-in High Rollers events, but players are advised to check with event organizers.

Every player who enters a Winter Series tournament will also be entered into a special All-In Shootout on Tuesday 9th January at 3:00pm (ET), with the winner of the “PSPC Monthly AISO Winter Series Entrants Final” being awarded a $30,000 PSPC Platinum Pass. Please note players in France, Spain and Italy are not eligible for the Winter Series promotions.

There are three more All-In Shootout Finals and one exclusive freeroll tournament scheduled for the first weekend in February on the PokerStars.com, .eu and .uk platforms – each awarding a $30,000 PSPC Platinum Pass to the winner. In order to qualify for one of these promotions players must either:

With the potential to have a prize pool in excess of $10 million, the PokerStars Players Championship has attracted the attention of most of the world´s leading players. But the event is not only for the players with the deepest pockets. You could win a PokerStars PSPC Platinum Pass in January by playing in a $2.20 buy-in Winter Series event or opening a Rewards Chest and finding a freeroll ticket inside.

Naturally, in order to take advantage of the opportunities, you have to be playing at PokerStars. If you do not already have an account with the world´s largest online poker site, visit PokerStars today and create your account using the PokerStars marketing code “[bonuscode room=”pokerstars”][/bonuscode]” in order to be eligible for a first deposit bonus of up to $600/€500/£400 and the chance to win a package to the PokerStars Players Championship in January 2019.