How Regulation is Killing Online Poker

Regulators and online poker companies need to wake up to the fact that online poker is dying a slow death due to regulation – and do something about it! 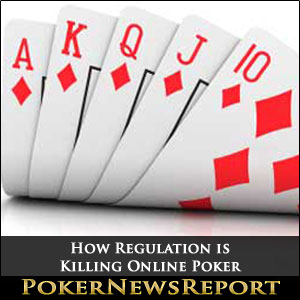 Regulators and online poker companies need to wake up to the fact that online poker is dying a slow death due to regulation – and do something about it!

You do not have to be an investigative journalist to notice that traffic is declining on most of the world´s online poker sites – just log into your usual site and try to find a cash table at the game/stake of your choice/bankroll without having to join a waiting list.

Sit n Go games are taking longer to get underway, tournaments get cancelled when they fail to meet the minimum number of players, and online poker sites are starting to reduce their player benefits and first deposit poker bonuses.

Online poker has survived some pretty difficult times in the past (UIEGA, Black Friday), but the indications are that it is in an irreversible decline; and practically all of the blame for its current demise can be attributed to regulation.

Long before poker regulation was discussed in the United States, cash-strapped European countries – Italy, France, and Spain – had ring-fenced their players, charged exorbitant amount to the poker companies to operate in their jurisdictions and introduced taxes on profitable players.

This had the impact of fragmenting existing European/RoW player pools and forcing poker companies to increase their rake and reduce their player benefits in order to pays for the licence fees and back-dated fines that were imposed on them.

Profitable players left their country of residence in droves to find tax domicile in a country where online poker remained profitable for them (did you ever wonder why so many Spaniards lived in London?), reducing the player pools in their respective countries further and compromising liquidity.

The Golden Egg is not so Shiny Now

The motive behind regulating online poker in Europe was purely taxable income. Governments hoped that by taxing their nation´s gamblers, they could resolve their respective economic crises. However, the Golden Egg of taxation has backfired and traffic on each of the leading European poker sites is in steep decline:

The consequences of this decline in traffic is that tax revenues have failed to meet expectations – a situation that has been mirrored in the regulated US States – and poker companies are considering whether they wish to remain in the loss-leading regulated markets.

A survey of Spanish players conducted earlier this year revealed that 40% of them now play at “unregulated” online poker sites – further reducing the tax revenues and player databases on regulated sites – and, in the first year of Spanish regulation, online poker companies reported joint revenues of €234 million, but a combined net loss of €72.5 million due to the high level of taxation – forcing Poker770, BetFred, Paf.com and the entire OnGame network to withdraw from the Spanish market.

It is worth mentioning at this point that the figures published above are for the latest six months of traffic on the leading European regulated poker sites and do not reflect the overall decline of players since regulation was introduced. So, why has the market not settled?

Basically this can be attributed to scenarios mentioned in the opening paragraph of this article – harder to find cash games, Sit n Gos taking longer to fill and tournaments getting cancelled. Online poker players are effectively bored with waiting and, as poker sites are retracting their promotions and making those that remain harder to achieve (1), there are fewer incentives for poker players to log into their accounts (2).

Furthermore, high stakes players – who remain on the regulated sites – are having to come down stakes levels to find a game, and effectively scaring low-mid stakes recreational players off of the tables. This compounds the issues further, reduces the poker sites´ revenues and the money they have to launch promotions to incentive players back to the tables.

(1) PokerStars current promotion for its ring-fenced Spanish players is a bonus on all VPPs earned within a 10-day period up to July 24th. The minimum requirement for this promotion is 500 VPPs for which players would receive a 10% VPP bonus for paying €83.00 in rake – not much of an incentive!

(2) Last week we published an article which showed that online poker does not promote gambling addiction and that only a small percentage of players demonstrate “intense gambling behaviour”. The remaining >95% are not likely to log into the online poker accounts if there is no incentive for them to do so.

Online Regulation in the States

The response to online poker regulation in the States was slightly different. The novelty value of being able to play regulated poker in New Jersey, Nevada and Delaware created a spike of interest; but due as much to technical geo-location and disconnection issues as miniscule player pools, levels of traffic soon went into rapid decline.

Although the initial precursors to the decline of player traffic in the regulated US States were different to those in Europe, the same factors of harder to find cash games, Sit n Gos taking longer to fill and tournaments getting cancelled now apply – reducing those players who are incentivised to play on the US regulated sites.

Meanwhile, three of the top five “unregulated” poker sites have seen significant increases in traffic over the last six months – with the other two having viable excuses for their decline (Bodog/Bovada suffered a minor decline in traffic due to the WSOP and Americas Cardroom abandoned their twice monthly reload bonuses to fund their $1 million guaranteed tournament in December).

How does this Equate to the General Decline?

The regulated poker market may only account for a minor percentage of all poker sites, but the effect of regulation is having an impact on the profitability of companies such as PokerStars, Bwin.Party and 888Poker which permeates into their operations elsewhere.

All the time that these three sites (and others) are having to subsidise their operations in regulated markets, there is less money to go around their .com operations. This results in fewer promotions, reduced guaranteed tournament prize pools and fewer incentives for players to spend their time (and money) playing online poker.

Traffic on all three sites has declined by an average of 25% since the start of the year, and although some of that decline can be attributed to seasonal variations, both Bwin.Party´s and 888 Holdings´ share value has declined by almost 30% in the past three months – indicating that something is seriously wrong. The situation is only likely to get worst as the Netherlands, Portugal and Russia consider regulating online poker.

Is There a Light at the End of the Tunnel?

From an impartial person´s point of view, the most obvious solution is a reduction in the taxes and licence fees charged by regulators, which frees up money for the poker companies to incentivise players to return to the tables. It is the basic economic principal of supply and demand, but when did national and State regulators (and for that matter poker companies) ever apply the most sensible principles in their business transactions?

Hopefully, upcoming regulatory changes in the UK will unite the fragmented player pools (in Europe at least) and lead the way into a new era of appropriate taxation, larger player pools and incentives for those who have abandoned their home countries or who are playing on “unregulated” sites. That would seem to be the only solution to prevent a total meltdown of online poker if the decline in traffic continues at its current rate.

Then all that has to be done is to convince US regulators to do the same!

One Reply to “How Regulation is Killing Online Poker”