U.S. poker players still holding out hope for federal online gambling legislation will be pleased to know that a House subcommittee will examine the issue. 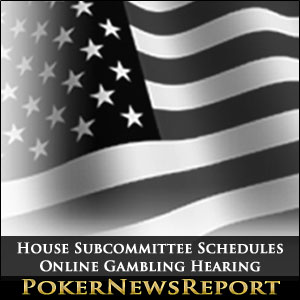 U.S. poker players still holding out hope for federal online gambling legislation will be pleased to know that a House subcommittee will examine the issue.

A hearing scheduled by the House Subcommittee on Commerce, Manufacturing, and Trade entitled The State of Online Gaming will be held on Tuesday, December 10, 2013 at 5:45 p.m. at the Rayburn House Office Building in the nation’s capital. The subcommittee is organized under the larger Committee on Energy and Commerce.

On the subcommittee’s agenda is an examination of the online gambling regulatory landscape following the DoJ’s ruling in December 2011 that reinterpreted the 1961 Wire Act. That ruling found the archaic act to apply only to sports betting, which paved the way for individual states to enact online gambling legislation as their state legislatures see fit.

Thus far, three states have capitalized on the DoJ’s reinterpretation. The latest being New Jersey, who kicked off an igaming hard launch just one week ago. That followed the online poker-only rollout of Nevada in April and a full slate of Internet poker and casino games offered by Delaware in early November.

Also under review by the subcommittee will be Rep. Joe Barton’s Internet Poker and Freedom Act that was introduced in July. That bill, H.R. 2666, has not gained any traction and that inaction on the part of federal lawmakers has propelled a number of states to consider online poker and gambling legislation on their own.

Other states who appear ready to seriously consider joining the three that are already offering various forms of online gambling within state borders include California, Pennsylvania, Mississippi and Illinois. Once a number of states have their online gambling schemes up and running, many industry insiders believe that a federal plan will have missed the boat due to lack of timely consideration.

The same subcommittee held a couple of online gambling hearings in 2011, but has not formally addressed the issue since. A witness list for the upcoming hearing has not yet been announced. Those interested can watch the Dec. 10 subcommittee meeting via webcast at energycommerce.house.gov.