The House Subcommittee for Commerce, Manufacturing, and Trade has scheduled a hearing on internet gambling for Tuesday, October 25th. 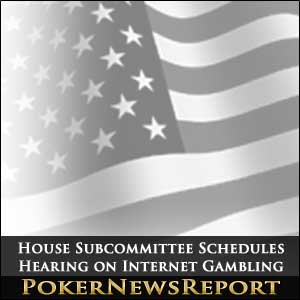 The House Subcommittee for Commerce, Manufacturing, and Trade has scheduled a hearing on internet gambling for Tuesday, October 25th.

As a subcommittee of the House Energy and Commerce Committee, it is believed that the committee members will debate Congressman Joe Barton’s HR 2366, known as the Internet Gambling Prohibition, Poker Consumer Protection, and Strengthening UIGEA Act.

“The hearing may be more about internet gaming, but the Barton bill will be hard to ignore given that Barton sits on the subcommittee,” said Poker Players Alliance (PPA) Executive Director John Pappas.

The subcommittee is seated by nine Democrats and 14 Republicans. Mary Bono Mack (R-CA) is Chairperson and Marsha Blackburn (R-TN) sits as Vice Chair of the subcommittee. Barton (R-TX) is also a subcommittee member.

HR2366 would regulate and legalize [geolink href=”https://www.pokernewsreport.com/us-poker-sites”]online poker in the United States[/geolink] by allowing state-licensed agencies to act as regulatory authorities. New Jersey and Nevada, the top dogs of brick-and-mortar casino gambling, would get the first opportunity to issue gaming licenses. The typical progression of Barton’s proposed legislation would be that the full committee considers it or that it is sent back to subcommittee for what is known as a “markup.”  A markup is the process in which a committee debates or amends proposed legislation. Pappas said that the PPA would “like to accelerate that as best we can.”

Behind the scenes of next weeks’s hearing is a bipartisan supercommittee, whose intent is to obtain funds for the government. Barney Frank (D-MA), the congressman responsible for supporting legalization and regulation of online gambling in the U.S., said that he’s encouraging members of the supercommittee to legalize internet gambling.

“Several of us are trying to get it into the supercommittee,” Frank said. “It would create $40 billion [in revenue] over 10 years.”

Pappas has been very encouraged by Frank’s attempts to push legalization of online poker to the supercommittee. Although there are no guarantees that the supercommittee will act anytime soon, the progress being made is a good sign.

“The supercommittee has been very receptive,” Pappas said. “I don’t think every member of the committee is making this their priority, but there are benefits of revenue and consumer protection.”

Pappas feels that it’s a good idea for the proposed online poker legislation to undergo an open debate. “This committee hasn’t had an opportunity to examine the issues,” he said. “It gives lawmakers a chance to say they’ve discussed it. It’s important to have an open debate on the issue.”