Hossein Ensan leads the 8 remaining players in the EPT Barcelona Main Event after busting Bram Haenraets – the player everybody wanted to win the tournament. 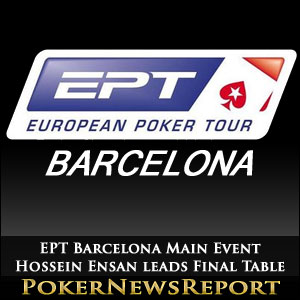 Hossein Ensan leads the 8 remaining players in the EPT Barcelona Main Event after busting Bram Haenraets – the player everybody wanted to win the tournament.

Day 5 of the EPT Barcelona Main Event saw twenty-five players return to the Casino Barcelona with the aim of making it through to today´s final table. Sadly for seventeen of the players, their day was to end in disappointment, as one-by-one they hit the rail.

Unlike Monday´s action – when players tended to bust out after getting in with the best hands – the course of yesterday´s play was more conventional, with six short-stacked players being eliminated during the first level of play when they ran into opponents with dominating opening hands.

In yesterday´s PokerNewsReport we reported how Dominik Panka – the last remaining former EPT Champion – was enjoying a sensational run of luck. Panka had been one card away from elimination on Monday before a series of unlikely double-ups elevated him towards the top of the chip counts.

On Day 5 of the EPT Barcelona Main Event, Dominik Panka continued where he left off on Monday – cracking Mikkel Nielsen´s pocket Aces with A♥ K♥, and eliminating Gerald Karlic in eighteenth place A♦ Q♦ > A♣ K♣ when he spiked the Q♠ on the River.

Panka himself tweeted It´s unbelievable how much good fortune I have, but his good run was soon to come to an end after he doubled up Andrea Dato A♥ Q♦ > J♣ J♠ (Dato ironically spiking the winning Q♠ on the River), doubling up Dato once again K♥ K♠ > 9♣ 9♠, and losing the last of his chips to Andrey Shatilov A♦ J♦ > A♣ 9♣ to be eliminated in eleventh place.

Haenraets´ Dream Comes to an End

Even if you have a financial interest in one of the eight remaining players, you cannot fail to have had a soft spot for Bram Haenraets at the EPT Barcelona. The bank employee from Amsterdam was playing in his first ever live poker tournament after qualifying in an €80 satellite, and he had led the field coming into the penultimate day of the Main Event.

Haenraets was still at the head of the chip counts after three levels of action at the Casino Barcelona on Day 5 of the EPT Barcelona Main Event, but after twice doubling up Pawel Brzeski either side of the dinner break, Haenraets was crippled in a three-way pot against Brzeski and Kiryl Radzivonau and lost the last of his chips when running A♠ 10♥ into Hossein Ensan´s A♥ A♦.

Leaders Flip-Flop Late in the Day

Prior to Haenraets´ elimination, several different players had headed the EPT Barcelona Main Event leaderboard. While Bram Haenraets´ chip stack had been in decline, Hossein Ensan had taken over at the top of the chip counts when eliminating Robert Schulz in thirteenth place A♠ 10♠ > 7♦ 7♠.

Ji Zhang then took over at the top after doubling up in an 8 million chip pot against Samuel Phillips (A♥ A♣ > K♥ K♣), before Kiryl Radzivonau (A♥ A♣) won the massive three-way pot which eliminated Pawel Brzeski (8♦ 8♣) and crippled Bram Haenraets (A♦ K♣).

Hossein Ensan regained the lead in the tournament when busting Mikhail Rudoy in tenth place, before Samuel Phillips forced Ensan and Radzivonau out of substantial pots to become the new chip leader. Hossein Ensan took the chip lead for the third time when eliminating Bram Haenraets in ninth place, and he leads the final table of the EPT Barcelona Main Event.

When play resumes at the Casino Barcelona this afternoon, the eight remaining players will be around twenty minutes into Level 32 (blinds 80,000/160,000 – ante 20,000). The next player out will receive €121,300 for reaching the final table, but everybody will be focusing on collecting the €1,261,000 first prize for winning the EPT Barcelona Main Event.

Of interest, although there are no former EPT Main Event Champions remaining in the field, the current chip leader Hossein Ensan won the EPT Seniors event last weekend for €4,535 ahead of Giancarlo Mussi – his biggest live poker score prior to going into today´s EPT Barcelona final table!