Dylan “Pokerl)evil” Hortin leads the PCA Main Event after an opening flight in which only 295 players turned up to compete for the $10 million guaranteed prize. 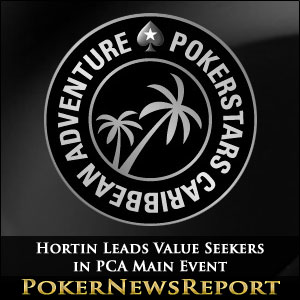 Dylan “Pokerl)evil” Hortin leads the PCA Main Event after an opening flight in which only 295 players turned up to compete for the $10 million guaranteed prize.

Executives at PokerStars Towers will be scratching their heads this morning to determine how they are going to squeeze 700+ players into the Imperial Ballroom of the Atlantis Resort to compete in Day 1B of the PokerStars Caribbean Adventure Main Event.

Of course, the problem may not arise if 700+ players do not show to compete in the Main Event; but then PokerStars will have a different problem – how to account for a significant overlay in their opening showcase event of 2014.

Meanwhile, on the felt, it was a typically crazy opening flight yesterday; with a mix of poker professionals, international sports celebrities and online qualifiers vying to progress onto the latter stages on the $10,000 buy-in PCA Main Event.

Perhaps the craziest hand of all occurred right at the beginning of the tournament, when last-minute live satellite qualifier Stephan Klam (J♦ 8♠) called a shove from Marco Palombi (Q♦ Q♣) on a board of J♠ J♥ Q♠ / 3♦. Klam looked like he would be heading for an early departure from the PCA Main Event against Palombi´s flopped Full House, but incredibly the J♣ appeared on the River to shoot Klam into an early chip lead and send Palombi to the rail instead.

PokerStars Pro Eugene Katchalov was also the victim in a Quads > Full House hand, when his A♣ J♥ made a Full House on the River, only to be bested by Martin Raus´ Turned Quad Fives; however Katchalov recovered to finish the day with double his starting stack – unlike his PokerStars colleagues Lex Veldhuis, Vanessa Rousso and PokerStars Team Online member Mickey Petersen, who were all eliminated from the PCA Main Event on Day 1A.

Dylan Hortin Gets His Man

At the end of the day, it was an online qualifier who is a poker professional with a touch of celebrity who leads the way; as Dylan “Pokerl)evil” Hortin qualified for the Main Event through a PokerStars FPP freeroll and bagged up 160,500 chips after eight levels of play to be the overnight chip leader.

Hortin had an excellent start to the day – busting out NBA All-Star Gilbert “Agent Zero” Arenas Q♥ Q♦ > Q♣ J♣ when Arenas missed his open-ended straight draw – and concluded it by out-kicking an opponent A♣ 9♥ > A♠ 8♥ when both players had turned trip Aces.

Hortin takes a 16 big blind advantage into Thursday´s Day 2, ahead of Victor Levy and Sam Greenwood, with Eugene Katchalov being the highest ranked PokerStars sponsored player – having recovered from his Quads > Full House hand mentioned above, to finish the day with 60,900 chips.

Looking Ahead to Day 1B of the PCA Main Event

Whatever happens on Day 1B of the PCA Main Event, it is going to be a crowded affair. The majority of “big-name” players who have travelled to the Bahamas to compete in this tournament are expected to take their seats today, and PokerStars executives will be hoping that somehow they can cram them all into the attractive, but not that big, ballroom.

Meanwhile, Dylan Hortin – and other players with decent chip stacks – will be hoping that Day 1B is relatively quiet in order that they can get some additional value from the $10 million guarantee.