Chad Brown, a well-respected poker pro with more than $3.5 million in career earnings, was awarded an honorary WSOP bracelet over the weekend. 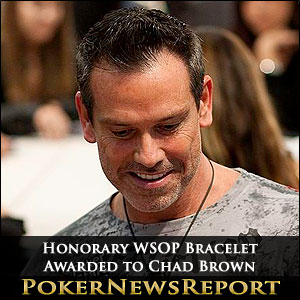 Chad Brown, a well-respected poker pro with more than $3.5 million in career earnings, was awarded an honorary WSOP bracelet over the weekend.

Brown is currently receiving hospice care after being stricken with a rare form of cancer about three years ago. The WSOP listened to the pleas of the poker community in veering away from tradition to bestow on Brown a coveted bracelet that the much-liked pro came ever so close to winning on numerous occasions.

The Team PokerStars Pro finished as runner-up three times and in third place once in WSOP events during an illustrious career that began in 1993. His largest payday occured in 2007 for a second place finish at the 38th annual WSOP in the $5,000 World Championship No Limit Deuce to Seven Draw event when he took home just shy of $325,000.

In a presentation ceremony, WSOP tournament director Jack Effel honored Brown for his contributions to the game of poker, pointing out that had he remained healthy, Brown would have certainly came out victorious in a WSOP event eventually. The popular pro, though not in attendance due to his illness, received warm applause from those in attendance.

‘Downtown’ Chad Brown last posted an update on his health on the PokerStars blog in February. He was very forthright in describing his illness and the many surgeries undertaken in an effort to get well. Characteristically, Brown stated that he will continue to view the situation like a poker hand, playing it to the best of his ability and realizing that life is full of the up and down swings that poker players know all too well.

Brown went on to write that liposarcoma was indeed a challenging illness, but that he refused to feel like a victim. Instead, he continues to count his blessings, including the love and support from family and friends and a lifetime of playing a game that he continues to be passionate about.

Brown’s most recent cash came in January of this year at the WPT $3,500 Borgata Winter Poker Open Championship in Atlantic City. A 26th place finish was good for $17,357, the Hendon Mob database reported. Just one week earlier, he was the runner-up in the $400 No Limit Hold’em Big Stack (Re-Entry) and added $37,213 to his career totals.