Multiple homes have been seized by federal prosecutors as they apply pressure and crackdown upon online poker sites who were operating in the States. One of the homes belonged to former Playboy Playmate Destiny Davis, who recently married Chad Elie in spite of the allegations levelled against him. 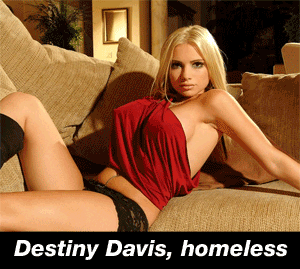 Multiple homes have been seized by federal prosecutors as they apply pressure and crackdown upon online poker sites who were operating in the States. One of the homes belonged to former Playboy Playmate Destiny Davis, who recently married Chad Elie in spite of the allegations levelled against him (their wedding day was the day after his arrest). Elie has been charged with conspiring to commit bank fraud by processing online poker site payments. Feeling the sting of being his new wife, Destiny, Playboy Magazine’s Miss January 2005, had her Las Vegas Mansion seized simply on the grounds of the identity of her new husband.

Davis bought the 7,200 square foot estate one year ago for an estimated amount of $1.5 million. Her husband has pleaded not guilty to the charges levelled against him, and has been released on a $250,000 bond secured by $50,000 in cash, which is to be paid by his wife and two other people.

Ray Bitar, one of the founders of Full Tilt Poker, has also had property taken. A total of four homes have been seized on connection to Bitar, all of which were located in Glendora, California, and worth upwards of $2 million each. One of the homes in question is currently occupied by Nabiha Bitar, who was married to Ray’s late father Jack.

Ray Bitar was indicted in April, and accused of operating an illegal gambling business and conspiring to commit bank fraud. He holds US citizenship, but is currently believed to be in Ireland, where his company headquarters are. Full Tilt had risen to be the second largest online poker room in the world, ranked only behind PokerStars (who are also embroiled in similar legal allegations). Many online poker players, however, have now eschewed the poker sites entirely. Following the events of Black Friday, scores fled out of fear of losing their cash. Players in the United States have now been banned entirely, their money in the process of being returned.

The US government is currently seeking for $3 billion from the founders of PokerStars, Full Tilt and Absolute Poker, all 11 of whom have been arrested. The federal prosecutors in Manhattan have also won a restraining order against 76 bank accounts in 14 countries, believed to have finds generated by online poker. As the profits from the poker sites were not processed by US banks, they were not subject to tax by the United States. The forfeiture of homes looks to raise the stakes of the ongoing battle yet again.