The 2013 WSOP Main Event kicked off on Saturday, marking the 10-year anniversary of Chris Moneymaker’s victory that caused poker’s popularity to skyrocket. 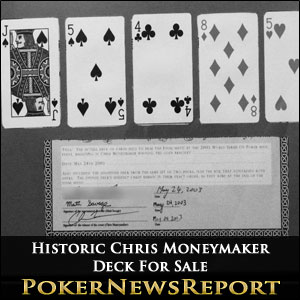 The 2013 WSOP Main Event kicked off on Saturday, marking the 10-year anniversary of Chris Moneymaker’s victory that caused poker’s popularity to skyrocket.

Moneymaker’s rise from amateur to pro came about when he won a seat to the Main Event via an online poker satellite at PokerStars. Players the world over flocked to online poker sites under the impression that if an everyman from Tennessee like Moneymaker was able to achieve such success, then it was possible for them to do so too.

The course of poker history was forever changed and a piece of that history is now for sale. A casino employee who managed to secure the deck of cards in which Moneymaker sealed the victory in defeating Sammy Farha for the title is attempting to sell the deck on eBay. Claiming to be “working behind the scenes at Binion’s Horseshoe” when Moneymaker won the gold bracelet and $2.5 million in that year’s Main Event, the seller is asking for a starting bid of $5,000.

Along with the winning deck comes a Certificate of Authenticity signed by the WSOP tournament director at the time, Matt Savage, and Moneymaker. For good measure, an ESPN broadcast of the heads-up competition between Farha and Moneymaker has been thrown into the package.

This is not the first time that the astute casino employee has attempted to peddle that deck of cards from a decade ago. In November 2011, Moneymaker’s winning deck was also available on eBay at a starting bid of $7,500. Nobody elected to bid that high and the auction ended without a sale. With the 10-year anniversary now upon us, the seller figures it may be a better time to cash in on his poker memorabilia.

Moneymaker’s name will forever be synonymous with the poker boom that allowed the game to gain a bit more mainstream acceptance. Poker rode a wave of popularity until Black Friday, when the DoJ cracked down on the proliferation of unregulated offshore poker sites that were catering to U.S. players.

Though U.S. players have since been shut out from playing at the world’s largest sites, the tide is seemingly turning in poker’s favor once again as individual states have begun enacting online poker and gambling legislation. As more and more states eventually join in and forge an interstate scheme that will allow players to compete nationally and perhaps also on an international level, another boom in poker may be on the horizon.