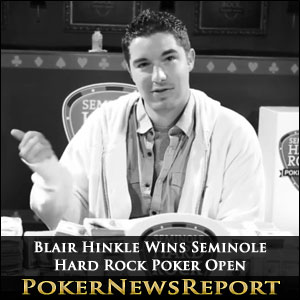 In what will be remembered as a heads-up match for the ages, the two fierce competitors would engage in a four hour seesaw affair that saw Hinkle on the ropes multiple times. But in the famous words of Al Pacino, “Just when [he] thought [he] was out, they pull [him] back in.”

Day 5 began with six players, all of whom were guaranteed at least $378,138 for their efforts. Short stack Greg Lehn was the first to hit the rail, lasting only 12 hands before being eliminated by Bonomo. In his defense, he started the day with only 14 big blinds.

Samuel Bernabeu Guilabert was next to go when he stacked off with two deuces against Bonomo’s Queens. Despite catching a wheel draw on the turn, Guilabert would be eliminated in fifth. As a consolation prize he received $494,490.

It would take another 37 hands for another player to his the rail. On hand #52, Ray Qartomy jammed with 7♦7♠ and was called by Hinkle’s K♦Q♠. The flop brought a Queen, another Queen hit on the turn for good measure, and Qartomy was gone.

A mere six hands later, Mukul Pahuja would three-bet jam with K♠10♠ and Bonomo would call with A♥10♥. The board didn’t pair either player’s hole cards and Bonomo would win with Ace high. Pahaju received $872,625 for his efforts.

Hinkle and Bonomo entered the heads-up match virtually even in chips. The possibility of a marathon match loomed, but no one would have predicted that it would last nearly 170 hands, especially after Bonomo claimed a two-to-one chip lead after less than forty hands.

But over the course of the next 55 hands, Hinkle would chip away and eventually draw close to even. Then, it would be Bonomo’s time to shine. On Hand #183, the two were all-in. Both players held A-3 and the pot was chopped.

Three hands later, Hinkle’s Aces double through Bonomo’s flopped middle pair, and they were right back where they started.

Once again Bonomo would bounce back, and at one point late in the match held a three-to-one chip lead. It seemed all but over for Hinkle, but he doubled through Bonomo once again, and soon after that regained the chip lead.

For his efforts, Hinkle won $1,725,245 and a commemorative guitar. However, before the match began it appeared as though the two remaining players made a deal. Maybe they just split the money 50/50 and were playing for fun, who knows?

That’s it for the Seminole Hard Rock Poker Tour. Given its massive success, it’s safe to assume that the Hollywood, Florida casino and hotel will continue to hold high entry tournaments.