Music magnate and high stakes regular Alan Meltzer give away $1.5 million of his estate to two of his former employees…from beyond the grave, 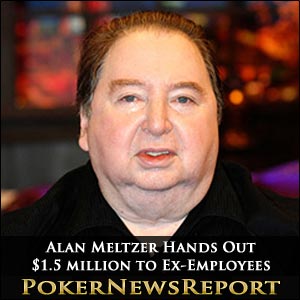 There are countless extremely kind-hearted professional poker players out there – but it might be hard to match the generosity shown by music magnate and high stakes regular Alan Meltzer…from beyond the grave.

We all know that the likes of Jamie Gold, Jennifer Harman, Joe Hachem, Mike Sexton, Phil Hellmuth, Annie Duke, Victor Ramdin, Phil Gordon and, of course, Barry Greenstein have been generous with their time and money.

But they are all still with us, while Meltzer continues to display an impressive level of benevolence even long after his death.

Then again, even if he did give away $1.5 million of his estate to two of his former employees, Meltzer’s acts of kindness did not go down well with his former wife of 13 years, who had some very strong words to explain her feelings for her dead ex while also suggesting he can give his cash “to the bums” if he wants.

Anyway, poker fan Meltzer – who founded and owned New York City-based record label Wind-up Entertainment, Inc – died on October 31 last year aged just 67, but still managed to bring very large smiles to a couple of his old friends. The affluent music executive left an incredible $1 million for his chauffeur as well as $500,000 for his doorman after suddenly dying late last year. That $1.5 million is equivalent to approximately 15% of the recreational poker player’s estate – with the majority of his wealth accumulated after Wind-up became the world’s biggest independently owned record label.

But Meltzer, who lived in a New York luxury apartment building within the city’s Upper East Side, never forgot the assistance he received from Jean Laborde, his chauffeur, and doorman Chamil Demiraj – and made certain they were both included in his will. Laborde and Demiraj spoke to daily tabloid newspaper The New York Post about their deceased boss, with the former saying: “I don’t know what to do exactly with the money, but one thing I know for sure – every year I’m going to bring the guy some flowers at his grave.”

The 54-year-old also told of how he enjoyed working for Meltzer but also misses his ex-employer, adding: “He was such a nice guy. He left me money, but it’s not a good deal for me because it means he’s no longer here”. Demiraj reinforced Laborde’s words during the newspaper interview, saying: “I appreciate it [being given $500,000]. He was a generous guy. He was a really good friend of mine, and I was a good friend of his. It’s a surprise. Peace and rest to him. That’s all I can say.”

Having formed Wind-up back in 1997 after enjoying great success with CD One Stop – which distributed pre-recorded music during the late 1980s and through the 1990s – Meltzer’s fortune grew large enough for him to enjoy frequent journeys to Las Vegas to take part in some of the world’s most exacting cash games.

Some of you poker fans with good memories (although hopefully you all enjoy impressive recall if aiming to succeed at poker!) might remember Meltzer when he appeared on High Stakes Poker back in 2009.

Meltzer faced off against the likes of the legend that is Doyle ‘The Texas Dolly’ Brunson, as well as Eli ‘Mr Vegas’ Elezra, Phil ‘The Unabomber’ Laak and Tom ‘durrrr’ Dwan on the cash game show broadcast by cable television network Game Show Network (GSN) in the USA.

However, Meltzer’s ex-wife Diana – whom he divorced back in 2010 – was not so impressed by the poker player’s kindness to his two former employees and friends.

She also chatted with The New York Post, but was most certainly thoroughly indifferent – while also hostile – about Meltzer’s bequest, saying: “I could care less. If he wants to give it to the bums, he can give it to the bums.” But Diana did not stop there, saving her most vitriolic attack on he former husband until last by adding: “He could f**k a nun. I couldn’t give a s**t. He can give his money to whoever he wants. We’re divorced. The man is dead.”

Obviously, there were more than a few hard feelings left following the couple’s divorce, with the break-up that ensured Diana did not get her expected one-third of Meltzer’s estate a likely major contributor to her evident bitterness…and no amount of post-life generosity is going to change that, I suspect.

Unfortunately, life is in many ways similar to high stakes poker games, but not many of us will ever have the opportunity to tip so impressively following our demise – or exit, if you will. Good on you, Mr Meltzer.