Roman Herold led a German poker renaissance on Day 4 of the EPT Berlin Main Event and takes a substantial chip lead into the penultimate day of the tournament. 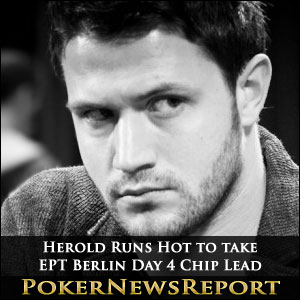 Roman Herold led a German poker renaissance on Day 4 of the EPT Berlin Main Event and takes a substantial chip lead into the penultimate day of the tournament.

Herold enjoyed a “fortunate” day at the tables in Berlin´s Grand Hyatt Hotel, flopping two pairs to eliminated previous chip leader Aku Joentausta (A6 > AJ) and then rivering the 7♦ in the biggest pot of the tournament so far to make a better two pair (with A♠ 7♠) than Alexander Helbig (A♥ 2♠), who had hit his two pair on the flop.

Herold takes a substantial chip stack into the penultimate day of the EPT Berlin Main Event; ahead of Russian Dashgyn Aliev, and then seven other German poker players including Helbig and Robert Auer – who also won a huge pot at the end of the day A♠ K♥ > A♣ J♦ > Q♦ Q♥ to chip up from potentially being eliminated to 1.38 million chips.

With just seventeen players left in the EPT Berlin Main Event, it is hard to look beyond a first German victory on the European Poker Tour since Martin Finger handed his rivals a beating at Prague in December 2011. Still alive in the tournament, but rapidly running out of chips, are Americans Olivier Busquet (736,000 chips) and Calvin Anderson (561,000 chips), while Norway´s Kevin Stani (862,000 chips) is the last remaining hope for the first ever dual EPT Main Event winner.

If there is to be a shock winner, look no further than sole French player Phillippe Barouk. Currently rooted to the bottom of the leaderboard, Barouk started Day 4 in 53rd position of the 55 remaining players, but managed to get maximum value out of Lithuanian “Dangerman” Anaras Alekberovas A♥ A♣ > 8♣ 6♣ before taking a slice out of Aku Joentausta  with a turned A♦ high flush. Barouk (531,000 chips) nursed his stack through the rest of the day, but with blinds of 12,000/24,000 (ante 3,000) when play resumes at the Grand Hyatt Hotel this afternoon, the Frenchman will not be able to nurse his chips much longer.

Looking Ahead to EPT Berlin Day 5

With only seventeen players in contention, and play scheduled to continue until a final table of eight is determined, Friday should be a fairly short day at the EPT Berlin Main Event. Roman Herold has been initially drawn on a table where the next biggest stack (Robert Haigh) is a just over third the size of his, but many of the other chip leaders will have to tough it out against each other if they want to reach Saturday´s final table.