Hernandez Remains in WPT Borgata Lead after Day 1B Controversy 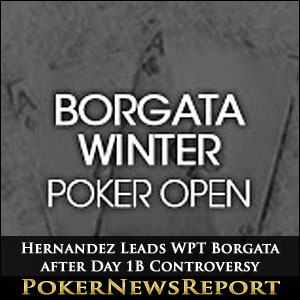 The 2014 Borgata Winter Poker Open is likely to go down in the history books for all the wrong reasons. After the cancellation of Event #1 due to the discovery of counterfeit chips, yesterday´s action during Day 1B of the $3 million guaranteed Championship Event was disrupted when DJ MacKinnon returned from dinner to find his chip stack had vanished.

The situation was resolved after a review of security footage revealed that MacKinnon´s chips had been “accidently” amalgamated into those of Robert Merulla – who had won the final pot before the dinner break – but Merulla was extremely reluctant to pass the chips back, and only agreed to return MacKinnon´s stack after the intervention of tournament director Tab Duchateau.

After eight levels of play, the player with the biggest stack when the chips were bagged and tagged was Todd Rebello. Unfortunately, how he came to amass a stack of 229,825 chips went unnoticed amidst the frenzy of players finding their seats, busting out, re-entering and finding their seats again – however, his chip stack was not big enough to overhaul Day 1A chip leader Lazaro Hernandez, who remains overall chip leader in the event with 258,175 chips.

Behind Rebello, the Day 1B field appears to be pretty well spread out. Officials at the Borgata are not releasing the official chip counts and table draw until play gets underway for Day 2 on Tuesday, but it looks as if second in chips on Day 1B was Robert Boyco (209,500 chips) with Mike Linster (160,225 chips) some way back in third.

What is clear from the reports and Tweets emanating from the Borgata Hotel Casino and Spa was that it was not a good day for the ladies. No female player has ever won an open WPT Main Event, and the chances of it happening at the Borgata Winter Poker Open Championship were vastly reduced yesterday with the eliminations of Vanessa Selbst, Amanda Musumeci and Ebony Kenney. Kathy Liebert looks to be the highest ranked lady player in the event with 88,500 chips, but until organisers release the official chip counts, that figure cannot be confirmed.

Subject to confirmation, 657 players will return for Day 2 of the WPT Borgata Winter Poker Open Championship to resume the tournament on Level 9 (blinds 300-6000 – ante 75). Play is scheduled for a further eight 75-minute levels, during which time the final prize pool will be calculated and announced, along with the payout structure.

Hopefully the day will proceed without further controversy, which may result in the event organisers releasing the chip counts at the end of play. For the present, the following are selected Day 1A/Day 1B chip counts extracted from the WPT.com web site: