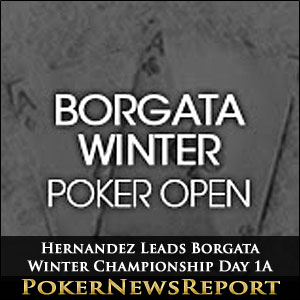 There was a fairly busy start to the 2014 WPT Borgata Winter Poker Open Championship Event (Event #19) as 422 entries were received for the first of two opening Day 1s – slightly up on last year´s 397, and well on the way to cracking the guarantee for the $3,300 + $200 buy-in re-entry event.

After eight 75-minute levels, Lazaro Hernandez will carry the largest chip stack forward into Day 2, after he amassed 258,175 chips on Day 1A – nearly five times the average chip stack and more than 70,000 chips ahead of his closest competitor John Racener (186,250 chips).

Josephy has an Expensive Day

With late registrations and unlimited re-entries allowed until the end of Level 6, some of the early action was frantic. Cliff Josephy had been one of the early chip leaders after busting out an opponent Jacks > Tens in one of the first hands of Level 2. However, Josephy was also one of the first players to bust (pocket Tens < trip Nines), re-enter and bust again (K♠ Q♠ < Ryan Eriquezzo´s K♥ K♦).

He then fired a third bullet and bust again towards the end of Level 8 in a three-way pot against Jeremy Menard and Roland Israelashvili. The chips had gone all-in with the board reading 7♠ 6♠ 5♦ / 8♦ and with Josephy (7♥ 4♥) having made an Eight-high straight, Menard (9♣ 8♣) having made a Nine-high straight, and Israelashvili (K♠ 2♠) needing a Spade to complete his flush. Fortunately for Menard the 4♦ bricked on the River and he enjoyed almost a triple-up, while Josephy was dispatched to the rail for the third time in the day.

Meanwhile, John Racener also enjoyed a fruitful first couple of levels – doubling up against Eric Panayiotou A♠ 7♠ > A♣ K♠ on a four-spade board during Level 2 – and finished the day strongly as well – calling Jake Bazeley´s six-bet shove for 86,800 chips and seeing his Q♦ Q♠ hold against Bazeley´s J♥ J♠.

If history is anything to go by Day 1B of the WPT Borgata Winter Poker Open Championship should be twice as bust as the first opening flight. Re-entries and late registrations are again open until the end of Level 6, and players who crashed out on Day 1A (Will Failla, Anthony Zinno, Chino Rheem, Vanessa Selbst – and Cliff Josephy) have the opportunity to re-enter again if they so wish.

The format of the Borgata Winter Poker Open Championship Event also allows players who have survived Day 1A with small stacks to re-enter and then forfeit the smaller of their stacks if they should survive Day 1B. This might be particularly appealing to last year’s winner Andy Hwang, former WPT Paris Champion Matt Waxman or Paul Volpe, after all three players finished the day with half the chips they started with.

Players who will not have such concerns today include-