At the close of Day 2 of the WPT Borgata Winter Poker Open Championship, Lazaro Hernandez and Matt Haugen have a substantial chip lead over the 190 survivors. 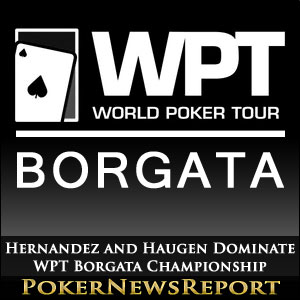 At the close of Day 2 of the WPT Borgata Winter Poker Open Championship, Lazaro Hernandez and Matt Haugen have a substantial chip lead over the 190 survivors.

Day 2 of the WPT Borgata Winter Poker Open was a colossally busy day. After the chip counts from the two opening flights had been scrutinised on Monday night by Borgata officials, 640 players returned to compete on Day 2, led by overall chip leader Lazaro Hernandez.

A rash of early eliminations reduced the field to around 500 players by the end of the second level of the day; during which time Hernandez had temporarily lost the chip lead after doubling up Matthew Weiss Q♣ Q♠ > A♦ K♥ and Matt Haugen took over at the top of the leaderboard when turning a gutshot Queen-high straight with Q♣ 10♦.

Haugen was to increase his lead when taking 2012 WSOP Main Event winner Greg Merson for 50,000 chips with a pair of Threes, but Hernandez leap-frogged him again when busting out WPT ambassador Mike Sexton with flopped Quad Nines against Sexton´s flopped paired Ace.

Always Controversy at the Borgata

Lazaro Hernandez bagged up 753,000 chips at the end of the night as opposed to Matt Haugen´s 735,500 chips, but it could have been a lot more had it not been for some eagle-eyed players at Hernandez´ table when it looked as if the chip leader had bust Shannon Shorr from the WPT Borgata Championship.

Shorr had got all-in with pocket Jacks on a flop of J♥ 8♣ 2♥ after trapping Hernandez (pocket Aces) with a post-flop check. Hernandez had dropped one of his cards in the excitement of putting Shorr´s tournament life at risk, but the players around the table accepted it was a genuine mistake and let him pick it up again.

The dealer then dealt the 6♠ and A♠ to give Hernandez a better set; however, Nick Guagenti and James Caldarero noticed that the dealer had neglected to burn a card before dealing the Turn card and Tournament Director Tab Duchateau was summoned to resolve the situation.

With a 120,000 chip pot at stake, Duchateau ruled that the hand should be re-constructed from the flop and played out again – meaning that the 6♠ and A♠ were now the burn cards. The dealer re-dealt the Turn (9♣) and River (10♠) and Shorr´s set of Jacks held this time – doubling him up to 121,000 chips (Shorr later bust to Hernandez K♠ Q♠ > A♣ K♣, when Hernandez made his flush draw on the River).

Chasing Pack Some Way Behind

Some way behind the two trailblazers, Tyler Patterson sits in third place with 618,500 chips after busting Steve Sarmiento late in the day A♥ 10♦ > K♠ 7♠. A further gap in the chip counts sees Dan Heimiller in fourth place (556,000 chips), with Frank Toscano and Robert “Uncle Krunk” Panitch tied for fifth with 540,500 chips.

Other players who look favourite to make deep runs at the WPT Borgata Winter Poker Open Championship include John D´Agostino (501,000) who benefitted from an opponent´s faith in A♦ Q♦ to haul in a massive pot with a pair of Sixes, and Harrison Gimbel (496,000 chips) who cracked Steve Gee´s A♥ A♣ with a rivered set of Tens

Day 3 of the WPT Borgata Winter Poker Open Championship is schedule to play down to the last twenty-seven places – so it could be a very long day. The top 120 players will cash in the event (a min-cash is worth $6,739), and those that survive the day will be assured of $17,357.

Up top, the first prize of $842,379 is still several days away – the final table is scheduled to be played on Friday – and you can discover who ultimately triumphs in the $3 million guaranteed tournament by following Poker News Report on Twitter.