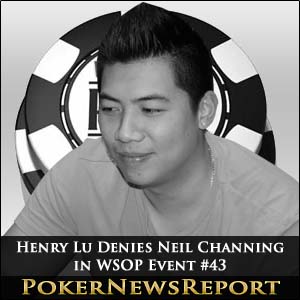 What was even more incredible was Lu’s amazing fightback that saw him battle from less than two big blinds at one point on the final day to claim the glory and reinforce that old saying that a player just needs “a chip and a chair” to be in with the chance of poker success.

However, it was sad to once again see popular British pro Neil ‘Bad Beat’ Channing almost live up to his nickname by falling short of his first bracelet from 27 cashes at the series following a marathon heads-up clash.

The long-suffering Channing now has two runner-up finishes from four final tables, but will be most disappointed with this latest result – particularly after dominating the final table to be a huge chip leader before losing out to Lu when heads-up.

Hopefully the consolation prize of $406,409 as runner-up will ease the Londoner’s pain, even if just a little, as he strives to fulfill his ambition of claiming at least one WSOP bracelet.

Having started their heads-up clash with a massive chip lead of more than 4 to 1, Channing was favourite to finally land that first bracelet in Vegas, but Lu was in no mood to capitulate – even if down 10,200,000 to 2,250,000 in chips.

Lu doubled-up early on before taking down a massive pot to see wrest the chip lead from Channing. Thereafter, the players swapped the lead several times, with Channing actually regaining his enormous chip lead on more than a few occasions.

In fact, Lu was all-in twice but doubled-up both times as this epic encounter topped the three-hour mark, before the event’s last hand played out with a classic coinflip that Channing lost.

On the button, Channing opened to 250,000 and Lu shoved all-in. Channing made the call to show A♦ J♦, while Lu tabled 4♣ 4♥. The gathered railbirds got to their feet to see a flop of 2♥ 3♠ Q♠ that changed little. The K♦ turn gave Channing several additional outs, but the 3♣ river was no help to the Englishman.

Lu’s supporters charged the stage to celebrate with their friend, while – in stark contrast – Channing stayed motionless in his chair, obviously in shock that he had failed in his gold bracelet goal. However, the likeable and well respected Channing did eventually get up from his seat to shake Lu by the hand and leave the table to a generous round of applause.

This latest cash takes Channing’s lifetime tournament earnings beyond $3 million – but we at Poker News Report expect to see this skilled pro challenge for more jewellery in the very near future.

California’s Randy Lew – who had started Day 3 with a good sized stack – was next to hit the rail in 12th place for $37,657 after struggling to get any foothold in the game. His tournament came to an end when all-in showing 6♣ 6♦ against Lu’s A♣ J♣. The 9♣ A♥ Q♣ 4♣ Q♥ board gave Lu an ace-high club flush for the elimination as the ‘unofficial’ final table approached.

Vegas’ Zach Clark left in 10th place for $37,657 when his K♥ K♦ were out-flopped by the Q♥ Q♦ of Lu to hand the latter trips. Amazingly, that was Lu’s third successive knockout and saw him begin the official final table just 10,000 chips behind leader Channing.

Jared Rosenbaum exited in ninth for $48,614 as Channing scored the elimination when his Q♥ Q♠ were too good for the Detroit player’s A♣ 4♦, while the Englishman increased his lead still further when sending Frenchman Francois Dur to the rail in eighth for $63,459. This time, Channing’s Q♣ Q♦ overcame the 10♥ 10♣ of Dur.

Hungarian Balazs Botond left in seventh place for $83,802, when he shoved his short stack with 6♦ 6♥ but lost out to the 9♣ 9♦ of Ohio’s John Nelson. But Channing still had the chip lead and again added to it by eliminating Pasadena’s Hovan Nguyen in sixth place for $111,961.

Channing had over half the chips in play after the dinner break and he continued that dominance by knocking out fellow Brit Tom Alner in fourth place for $207,019. The Bristol player open-shoved with J♦ 8♦ but failed against the A♦ 9♦ of Channing, who now started three-handed play with three-quarters of the chips.

Vegas-based James Mackey doubled-up through Channing, but was dramatically knocked out on the next hand in third place for $286,633. Mackey was all-in and showed K♦ Q♣ to face the 5♦ 5♣ of Channing. The K♣ 3♥ 4♣ 3♠ board kept Mackey on course to double-up again, but the 5♠ on the river ensured that the heads-up clash would be between Channing and Lu.

Day 2 started with 320 survivors, with the money bubble bursting to allow Ohio’s Cory Huston to claim $2,730 in 297th place.

Barry Greenstein Out On Day 1

Meanwhile, Day 1 ended just 23 places short of the money – with the field being so swiftly cut down to just 770 survivors after the dinner break that at one point players were being eliminated at the rate of three every 60 seconds!