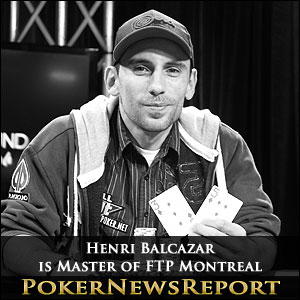 Either Henri Balcazar is a master of timing or a master of good fortune, but last night he became the master of Montreal after winning a substantial number of flips to take down the FTP-sponsored Montreal Poker Festival Main Event for C$194,044.

However, not every hand went in Balcazar´s favour and, when play was both seven-handed and three-handed, he was the shortest stack of the remaining players each time. Indeed, he did incredibly well to still be in contention in the later stages of the tournament, as he had started the final table with just a third of the chips held by overnight chip leader Vinny Pahuja

The gap at the top of the chip stacks narrowed during the first couple of levels as the short stacks Colin Pinche and Zheng-yi Xie were sent to the rail by Mike Linster (J♦ J♥ > 8♣ 8♠) and Eric Despres (A♥ Q♣ > A♠ 3♠) in ninth and eighth place respectively.

Linster then took a massive pot from Vinny Pahuja (J♣ 10♣ flopped straight > A♥ Q♦ two pairs) to take over at the top of the leaderboard and was instantly chased up by Eric Despres, who forced Bill Kontaratos out of a 1.6 million chip pot after flopping the nut flush.

Level 32 is All Action

Despite the remaining seven players being closely stacked at the beginning of Level 32 (blinds 75,000/150,000 – ante 25,000), only four players remained by the end of it. Roger Lamia was eliminated in seventh when his A♠ 6♠ failed to improve past Guillaume Rivet´s J♣ J♠ and Vinny Pahuja (6♦ 4♦ – two pairs) was unlucky when Henri Balcazar (K♥ Q♥) rivered the 3♥ to complete his flush and send the former chip leader to the rail in sixth.

Within minutes Lamia and Pahuja were joined by Bill Kontaratos (J♥ 10♠), who was set all-in pre-flop by Guillaume Rivet (A♠ 3♠) and who missed the board completely to bust from the tournament in fifth. Rivet´s dual knock-out had moved him up to second place on the leaderboard – still 8 million chips behind Mike Linster, but a long way clear of Eric Despres who looked like he was beginning to struggle.

At the start of Level 33 (blinds now 100,000/200,000 – ante 25,000) it was all change among the minor places. Eric Despres tool down pot after pot with bigger-than-normal opening raises and pot sized continuation bets to chip up closer to Rivet and Balcazar. Rivet took an enormous hit to his chip stack when losing a 7 million chip pot to Mike Linster´s backdoor nut flush, and was then eliminated in fourth when getting all-in with 5♣ 5♠ and Eric Despres (A♥ K♦) catching the K♥ on the Turn.

A three-way deal was agreed after Rivet´s departure which would lock up C$200,00 for massive chip leader Mike Linster and C$150,000 each for Eric Despres (now second in chips) and Henri Balcazar, with C$44,046 to play for. Thereafter, Linster used his commanding chip advantage to good effect, and three times in succession forced Balcazar out of big pots – so much so that he was reduced to less than 3 million chips as the game entered Level 34 (blinds 125,000/250,000 – ante 25,000).

The Flippopotamus Arrives and Takes Victory

Balcazar´s recovery and path to the FTP Montreal Poker Festival title was an amazing one. He won three consecutive flips against Mike Linster A♦ 9♣ > K♦ 9♠, 8♥ 8♦ > A♣ Q♥ and 5♦ 5♣ > A♣ J♦ to move into the chip lead and reduce Linster to being the short-stack. Balcazar then made it four flips in a row to eliminate Mike Linster in third 8♠ 8♥ > A♣ J♣, come from last to first in less than a level and take a 3:1 chip advantage into the heads-up against Eric Despres.

The heads-up was only to last three hands. On the deciding hand Eric Despres raised to 800,000 chips from the button and Henri Balcazar made the call. Following the flop of 10♦ 4♦ 3♥ Balcazar led out for 700,000 chips and Despres responded by raising up to 2 million chips. Balcazar paused, but then announced he was all-in and Despres snap-called.

The 2♠ on the Turn kept Despres ahead, but gave Balcazar an open-ended straight draw to add to his flush options – which were completed when the J♦ was dealt on the River. Henri Balcazar had completed one of the most incredible turnarounds from being at risk of elimination three times during three-handed play to winning the Full Tilt Poker Montreal Poker Festival Main Event

With a deal negotiated when the game was three-handed, Mike Linster collected the biggest prize in terms of money, but history will record that Henri Balcazar was the Master of Montreal!

One Reply to “Henri Balcazar is Master of FTP Montreal”