Hellmuth Dodges History, Danzer and Bojang Run With It

The second weekend of the 2014 Word Series of Poker Asia Pacific turned out to be a historic one. 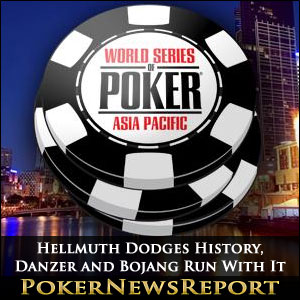 The second weekend of the 2014 Word Series of Poker Asia Pacific turned out to be a historic one.

Do you remember Phil Hellmuth’s famous quote I can dodge bullets baby? Well, turns out he can dodge much more than just pocket Aces; he can also dodge the chance of making (once more) poker history.

The Poker Brat missed the opportunity to get his hands on the 14th WSOP gold bracelet of his career yesterday. He was the guy to beat in Event #7: AU$2,200 Six-Handed No-Limit Hold’Em after surviving the first two days of the tournament. On the third and final day however, he came up short finishing fourth and letting a bracelet rookie steal the spotlight – Alexander Antonios.

A cash grinder from Sydney, Antonios knew just how important the moment was for Hellmuth and paid his respects to the most successful player in WSOP history. He told WSOP.com:

It’s obviously tough to win a bracelet. People like Phil have been around for 25 years and have ‘only’ 13. I really lucked out on this one and it may never happen again, but I would definitely like another shot.

Antonios was almost as chatty as the American not missing any opportunity to get into a verbal fighting with the legend. He also didn’t miss the opportunity to come on top and take gold on his home floor. On the other hand, the Poker Brat may have missed number 14 but he certainly made sure he is well heard at the final table.

During one specific hand against runner-up Michael Tran and with two kings on the board, Hellmuth said loud and clear:

Of course I have a king, I’m Phil Hellmuth. What do you think?

Well you’ve got to give him props on this one; he is indeed the WSOP King with 13 gold bracelets, 108 cashes and over $12.5 million in WSOP earnings.

History In The Making

As opposed to The Poker Brat, red-hot German George Danzer did make history this weekend although he had other plans in mind. He was one of the shortest stacks at the table and was content to bust first at the final table and retake the 2014 WSOP POY top spot. He said:

I just wanted to come sixth place in this tournament. I was nitting it up on the bubble yesterday because it was so important to the Player of the Year. Then when I made the final table, I was completely relaxed. I just thought, okay let’s get it in with a good hand early and if I double up, then maybe something good can happen.

Danzer is only the sixth player in poker history to capture gold three times in a single year; Puggy Pearson, Phil Hellmuth, Ted Forrest, Phil Ivey and Jeff Lisandro are the other five with Lisandro being the last one, in 2009.

Atop of it all, the German is the favorite to win the 2014 WSOP POY race. According to PokerNews, he now has a 116.8 lead over second-place Brandon Shack-Harris. Only two more events are up for grabs: the Main Event and the High Roller and Shack-Harris needs quite a run in the next week to outpace Danzer.

Last but not least, there was another player at the 8-Game final table who rewrote poker history. His name is Ismael Bojang, another German-based poker pro. Bojang finished fourth in that particular event cashing in for the fourth time in Australia and for a record-breaking 13th time overall, in 2014. He broke the previous record held by Konstantin Puchkov (11 WSOP cashes in 2012) after cashing in Event #5 earlier this week. Overall, Bojang won over $300,000 in cash prizes in the last four months. Can he keep up the pace in the next two events?