Tiger Woods will indulge in some more regular risk-taking by hosting his own charity poker event in Las Vegas on Friday. 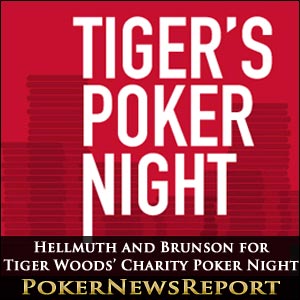 Some might say that golfer Tiger Woods has been gambling for a long time – not least with his failed marriage following several well-publicised indiscretions – but the legend will indulge in some more regular risk-taking by hosting his own charity poker event in Las Vegas on Friday.

The 14-time Major winner – who has earned more than $90 million from tournament wins and endorsements – has enlisted the help of some of his poker-playing pals to make the $10,000 buy-in No-Limit Hold’em tournament a success, with 11-time World Series of Poker (WSOP) bracelet winner Phil Hellmuth compering, as well as playing, and fellow poker superstar Doyle Brunson lined up to take part, too.

Now, without labouring a point, the eventual champion will be invited to a foursome (but, of course, that’s golf!) with Woods, as well as a putting lesson from the swinger (oops!), PGA (Professional Golfers’ Association) Tour Pro-Am spots, rounds of golf at exclusive courses throughout the USA, autographed memorabilia, and a custom club-fitting from Nike Golf.

Meanwhile, the 36-year-old Woods – who was divorced from the beautiful former Swedish model, Elin Nordegren, back in August of 2010 after admitting to his infidelities – has certainly got two of the biggest names in poker on hand at the Mandalay Bay Resort and Casino to ensure there will be no lack of competition when raising cash for the Tiger Woods Foundation, with 21 WSOP crowns between Hellmuth and 78-year-old living legend Brunson.

The buy-in for the event – which will raise money to award underprivileged youths with college scholarships in the USA – will also see players and a friend (or partner, Tiger) given tickets to Tiger’s Poker Night, as well as a two-night stay in a Mandalay Bay suite, and VIP tickets for music show Tiger Jam, which will feature rock singer Jon Bon Jovi and Friends next Saturday.

Woods will host the tournament that will surely attract the wealthy and charitable, so you can be sure we at Poker News Report will fill you in on all the action.

For additional details on the golfer’s charity, get on over to the Tiger Woods Foundation website.