Sen. Dean Heller is ready to move on after his public feud with Sen. Harry Reid regarding garnering enough Republican support for a federal online poker bill. 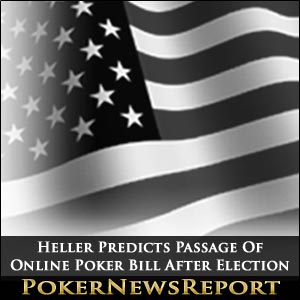 Sen. Dean Heller is ready to move on after his public feud with Sen. Harry Reid regarding garnering enough Republican support for a federal online poker bill.

During a television interview on Nevada NewsMakers and reported by foxreno.com, Heller (R-NV) said that online poker legislation is much too important to the economy and the public political fighting between himself and Reid (D-NV) is accomplishing nothing and is getting in the way of the fast approaching Nov. 6 election.

Let’s get the politics out of this, Heller said. Let’s put an important issue like Internet poker to the sidelines during this campaign because it isn’t helping the process. And unfortunately in this case, the process is just as important as the bill itself.

The spat between the two Nevada senators reportedly began when Reid criticized Heller’s inability to secure Republican support for the proposal as a failure of leadership and both sides bickered over whether the bill should be first introduced in the House or Senate. A draft of the bill that aims to legalize poker, off-track horse racing and lottery sales over the Internet but strengthen laws against other modes of online gambling was leaked to the public a couple of weeks ago. Many believe that someone in the Heller camp may have leaked the draft proposal in retaliation for Reid’s criticism.

Heller is now intent on putting the past behind him and focusing on the upcoming election, but predicted that he and Reid would be working together in the lame duck session to get online poker regulated in the U.S.

The Internet poker bill was never going to pass before the election, Heller said. It’s going to happen. And I’m still committed, as is Sen. Reid, to get a bill passed. When this is all said and done, both sides are going to come together and say, ‘OK, let’s do what’s best for Nevada.’