German Heinz Traut is the massive chip leader after Day 1A of the PokerStars-sponsored ESPT Madrid Main Event – the first leg of the 2014 Estrellas Poker Tour. 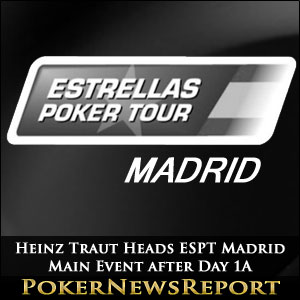 German Heinz Traut is the massive chip leader after Day 1A of the PokerStars-sponsored ESPT Madrid Main Event – the first leg of the 2014 Estrellas Poker Tour.

Season 5 of the 2014 Estrellas Poker Tour got underway yesterday at the Casino Gran Madrid with the first opening flight of the €500,000 guaranteed Main Event. 219 players ponied up the €1,100 buy-in or qualified online at PokerStars.es to compete in Day 1A and, after 9 one-hour levels of play, just 83 players survived to carry forward chips into Friday´s Day 2.

At the close of play German poker player Heinz Traut had a substantial chip advantage. His stack of 230,000 is one hundred big blinds clear of second-placed Ruben Pure Dieguez (129,600 chips) and third-placed Julio Manuel Parras Sickles (121,700 chips), and more than four times the average (51,700 chips).

The Story of Heinz and Two Cowboys

Traut´s rise to the top of the leaderboard came in back-to-back hands during the penultimate level of the night – and both involved pocket Kings. In the first of the two hands, Heinz Traut got into a post-flop raising war with A♥ J♥ on a flop of Q♥ 8♥ 5♠ against an opponent who held pocket Kings (aka “Cowboys”). A heart on the Turn handed Traut the monster pot worth more than 150,000 chips.

Traut´s chips found themselves in the middle of the table in the next hand against Josep “Josele” Maria Galindo. This time Traut had pocket Kings, and they held against Galindo´s pocket Tens to elevate the German into a huge chip lead, which he held onto until the chips were bagged and tagged at the end of the night.

I´ll Move Here, You Move There

Two of the biggest “names” to compete on Day 1A of the Estrellas Madrid Main Event were Hendon mobster Barny Boatman and PokerStars latest Red Spade pro Vicente “Codelsa” Delgado. Boatman has expressed a desire to abandon his luxury North London “mansion” and make a permanent move to Spain, while Delgado – PokerStars.es first Supernova Elite – is looking to move in the opposite direction to escape from the constricting Spanish regulated online poker scene.

Boatman will have plenty of time to go flat-hunting in Madrid after getting his Aces cracked by Aquilino Lopez (whose Six-Three hit two pairs on the flop and filled up on the River) and busting out soon after, while Delgado survived the first day of action with a creditable 60,000 chips after enduring a roller-coaster day which saw him playing with less than half of his 20,000 opening chip stack during Level 3, before flopping a set of Fives against an opponent who had rivered two pairs Aces and Nines.

Looking Ahead to Day 1B of the ESPT Madrid Main Event

Day 1B of the ESPT Madrid Main Event will see some of Spain´s brightest stars get involved in the action. Last year´s WSOPE Main Event winner Adrian Mateos Diaz and current UKIPT London champion Sergio Aido are confirmed as entrants, and they will be joined by several hundred online qualifiers and ESPT regulars.

Whether any of the Day 1B players will be able to amass a chip stack as substantial as Heinz Traut´s, we shall have to wait and see, but you can keep up to date with the action at the Estrellas Madrid Main Event by following @PokerNewsReport on Twitter.