Pius Heinz takes a colossal advantage into the climax of the World Series of Poker Main Event after bossing the second half of proceedings on the Main Stage of a packed Penn and Teller Theatre in Las Vegas. 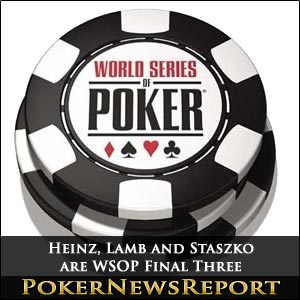 Pius Heinz takes a colossal advantage into the climax of the World Series of Poker Main Event after bossing the second half of proceedings on the Main Stage of a packed Penn and Teller Theatre in Las Vegas.

Taking 107,800,000 chips into Tuesday´s finale, the young German Pius Heinz has more than 50% of the chips in play – well ahead of Ben Lamb on 55,400,000 and Martin Staszko on 42,700,000. Having started in seventh place, and built his stack up early through the crippling of Eoghan O´Dea and the eliminations of Anton Makiievskyi and Phil Collins, Pius Heinz enjoyed a fair amount of good fortune on the ascent up the leaderboard but, once there, completely took control of proceedings.

A Slow Start for Heinz

Indeed, as play commenced on Sunday, it looked for a while as Pius Heinz was going to be the player left behind among the activity of the other short-stacked players. Bob Bounahra, Makiievskyi and Sam Holden all made significant early progress to leave Pius Heinz the shortest stacked of the nine players, and it was not until the beginning of Level 37 (blinds 300K/600K ante 75K) that Heinz collected his first chips – making a 2.3 million chip bet on the river to take an uncontested pot of 6 million chips away from Eoghan O´Dea. It was O´Dea who was also to be the catalyst for Heinz´s leap to the top of the leaderboard – folding in a 28 million chip pot, after betting 8 million chips on the river and being greeted by a shove from Pius Heinz for his last 15 million chips.

UK poker player Sam Holden had started the day as the shortest stacked player and was widely expected to be the first to depart, however, he had played his 12 million chips well throughout the first few hours and was still considered a threat before his unfortunate dismissal. Having shoved and collected the blinds and antes on previous occasions, he tried once more in the first hand of Level 38 (blinds 400K/800K ante 100K) with A♠ J♠ only to be called by Ben Lamb (A♥ K♣). Already in a poor second place, Sam was not helped by the flop of A♣ 9♣ 8♣, and when the Q♣ fell on the turn to complete Ben Lamb´s flush, Sam was left with no possible outs on the river and was eliminated.

With Sam Holden´s departure, Anton Makiievskyi was the player now most at risk, and several hands later he was also sent to the rail. Shoving his last 10.5 million chips with K♣ Q♥, he was snap-called by the chip leader, who was holding 9♥ 9♦. The flop of K♦ J♠ J♥ seemed to have provided a valuable lifeline for the Ukrainian, but the 9♣ on the turn gave Pius Heinz and full house and, with the 7♥ on the river, a pot of 23 million chips and a substantial advantage at the top of the leaderboard.

The noisiest contingent on the rail had been supporting Belizean Bob Bounahra, and through the early exchanges Bob had managed to pick up several valuable uncontested pots to give himself a genuine chance of making an impact on the WSOP Main Event Final Table. However, one ambitious shove too many with A♥ 5♣ saw him run into Martin Staszko´s A♠ 9♦ and the hopes for a Central America victory were dashed. At the same time, Matt Giannetti had emerged from the pack to close in on Pius Heinz at the top of the leaderboard. With a hand of 4♣ 2♣, he found a full house on a board of 9♣ 7♠ 2♦ / 2♥ / 9♥ to take a pot of 17 million chips against Heinz and to move within 5 million chips of the tournament leader.

With just six players remaining, Eoghan O´Dea and Phil Collins were the two players most at risk. Collins caught an unlikely double against Ben Lamb when his Q♥ J♦ made a flush on the board to master Ben Lamb (A♣ Q♣) and now leave the WSOP Player of the Year at risk. However Lamb (Q♦ 8♦) bounced back quickly at the expense of Eoghan O´Dea (A♣ 9♦) when spiking the 8♥ on the river, and the Irishman was soon out of the tournament when he shoved his last 2.3 million with Q♥ 6♣ into Martin Staszko´s 8♠ 8♦ and nothing was dealt on the board to help him.

Despite having almost 20 million chips, Phil Collins was now the shortest stack of the five remaining players. Dealt A♦ 7♦, he saw the opportunity to improve his position and shoved all-in against Pius Heinz´s 9♣ 9♥. The flop of 6♠ 5♣ 4♦ gave Collins the chances of an outside draw as well as pairing his Ace, but the 9♦ gave Heinz a set of Nines which held when the river 7♠ was dealt. The huge pot gave Heinz a lead of 25 million chips over Matt Giannetti in second; however Giannetti´s day was just about to fall apart.

The start of Level 40 coincided with the demise of Matt Giannetti. With blinds of 600K /1.2 million and an ante of 200K, every pot was vital. Giannetti lost his second position after Pius Heinz had hit him for 15 million chips when catching two pairs on the turn, and then Ben Lamb crippled his compatriot when his A♥ 7♥ made the flush to master Giannetti´s J♦ J♣. Down to his last five big blinds, Giannetti (Q♦ 10♦) doubled up through Martin Staszko (Q♣ 2♦), but busted to Ben Lamb in hand 178 – when Lamb flopped Quad Kings to beat Giannetti´s A♦ 3♠ and settle who are the final three in this year´s WSOP November Nine.

Play to Recommence on Tuesday

The three players remaining in this year´s WSOP Main Event get a day off today to draw breath after an astonishing day´s action. Play recommences at 5.30pm (local time) on Tuesday, and there will be a full review of all the action on Poker News Report, just as soon as we know who the 2011 WSOP Main Event winner is.