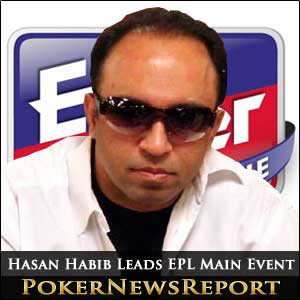 The Epic Poker league Main Event is now down to its final six players and going into the final day Karachi-born Californian, Hasan Habib, leads a quality field of five US poker players and one Canadian in the quest for the $1 million first prize.

Habib holds a slight chip advantage over Jason Mercier and David Rheem, and with Eric Seidel, Gavin Smith and Huck Seed making up the sextet, all of the remaining players have a chance of winning the event.

Day 3 of the Epic Poker League Main Event started with eighteen players aiming to claim one of the final six seats, and with UK poker player Sam Trickett holding a substantial chip advantage over the rest of the field. The action happened thick and fast, with Jason Bonomo – the shortest-stacked of the players – busting out first after two successful double ups against Habib and Trickett. His luck was not to hold for much longer, and when his 7♣ 7♦ ran into Jason Mercier´s A♣ K♠, the K♥ on the turn sent Bonomo to the rail, making him the first player to cash in the event ($43,190).

Hoyt Corkins was the next player to be eliminated when his A♣ Q♥ finished second to Adam Levy´s A♦ K♠, and he was soon joined by Hafiz Khan, whose A♦ 4♥ where friendless against Brandon Meyer´s 8♥ 8♣. Pro/Am qualifier, Dan Fleyschman was the next to depart – shoving his final 55,000 chips (blinds 3,000/6,000) with A♠ K♥ against Gavin Smith´s pocket Aces – and almost immediately Matthew Glantz´s flopped set of 8s were busted by David Rheem´s rivered straight and he too was eliminated.

Overnight chip leader, Sam Trickett, had not been enjoying the run of the felt through the early stages of Day 3, but still sitting in second place with a chip stack of 832,000 there was still plenty of time for things to improve. However, following the eliminations of Noah Schwartz (13th) and Ted Lawson (12th), Trickett folded a massive pot on the river to Hasan Habib (now down to 405,000 chips), lost a further 150,000 chips to Huck Seed when Seed caught a backdoor flush (now down to 249,000 chips) and busted out before dinner, when his 7♠ 7♣ could not overtake David Rheem´s 9♣ 9♦.

Only ten players remained in the game after Sam Trickett´s departure, but as the EPL Main Event is played 6—handed, play continued through four more eliminations. Isaac Baron was the next to depart when his flopped set was over-turned by Eric Seidel´s spade flush, and the last of the Pro/Am qualifiers, Brandon Meyers, was to fall in ninth ($70,960 not a bad payday!) when he shoved from the small blind with K♣ 2♠ and lost the race against big blind David Rheem´s A♣ 9♠.

Seed Crippled, but Hangs On.

With blinds increasing to 5,000/10,000 (Ante 1,000) a lot of blind stealing was going on. Hasan Habib crippled Huck Seed after flopping a flush when Seed had raised from the big blind pre-flop, and although Seed was able to double back up through Habib a few hands later he was still the short stack. Fortunately for Seed, Eugene Katchalov (8th) was busted by Gavin Smith´s flopped full house and after fifty-seven more hands Adam Levy (7th) was cruelly eliminated when his flopped full house of Queens over Aces was rivered by David Reem´s Aces over Kings.

The Final Six and Their Chips

Play resumes this afternoon at 2.00pm, when the final six players will battle it out to determine who becomes the inaugural Epic Poker League Main Event Champion