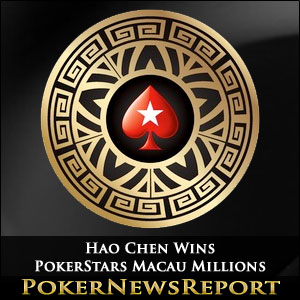 The HKD $2,200 buy-in PokerStars Macau Millions had a unique format in which the top 7% of players on each of the six Day 1s qualified for Day 2 and were guaranteed a min-cash of HKD $8,000. However, if players re-entered a later opening flight – and qualified for Day 2 again – they could forfeit the smaller of their stacks in return for an HKD $11,000 bonus.

Consequently the HKD $2 million guarantee for the PokerStars Macau Millions (around $257,500) was smashed, as 1,804 entries were recorded over the six opening flights – creating the biggest live poker tournament ever to be played in Asia. Of those 1,804 entries, 121 returned for Day 2 and – after ten levels of play – the final table was set when Hao Chen eliminated Orjan Skommo in eleventh place K♠ Q♦ > 7♥ 7♦ to move into the chip lead.

Final Table: Action from the Start

With the final table starting with blinds of 20,000/40,000 (ante 5,000) there was no hanging around by the short stacks. Miklos Viczena lost a flip against Lester Pinto (10♥ 10♦ > A♠ K♣) in the third hand of the day to be eliminated in tenth place, and he was quickly joined on the rail by Hongbing Li, who ran his A♦ Q♣ into Pinto´s A♥ A♣ – Pinto temporarily moving above 2 million chips before be crippled in a massive pot to Hao Chen.

Within an hour three more players were to bust – Thomas Tsang left the final table in eighth when his A♦ K♦ failed to improve passed Chai Tsui´s J♣ J♦, Lester Pinto departed in seventh place when his 9♠ 8♦ made two pairs, but Chui Woo Jung (A♥ 7♠) found a better two pairs, and Chui Woo Jung himself hit the rail in sixth place when his 10♣ 8♣ missed the straight draw against Hao Chen two pairs – giving Chen 7.8 million of the 16.185 million chips in play as the table went five handed.

The final table of the PokerStars Macau Millions soon went four-handed when Kenneth Leong´s (A♠ J♦) flopped top pair held against Ping Cheong Fung´s (7♦ 5♠) flopped bottom pair, and Chia Tsui was to be the next player out after moving all-in with K♥ Q♠, and pairing his Queen on the River, but failing to overcome Kenneth Leong´s turned set of Nines. The heads-up was set when Kenneth Leong moved all-in with 4♥ 3♥ on the board of 3♠ 9♣ 2♥ / 7♥ / 2♠ believing he had a third Deuce in his hand. Hao Chen made the call with K♣ K♦, and Leong was bust in third – while Chen took an 11.02 million -v- 5.165 million chip advantage into the heads-up against Sheng Chang.

The climax of the PokerStars Macau Millions was the longest passage of play without an elimination – lasting nearly an hour. During that time Sheng Chang played cautiously – and successfully – taking down a 1.5 million chip pot A♥ 4♥ > Q♣ 3♠ before giving some back when forced out of a couple of big pots. However, Chang doubled-up into a narrow chip lead when his 9♦ 7♦ flopped two pairs and improved into a Flush against Chen´s K♥ Q♥, before Hao Chen again reduced his opponent´s stack with some aggressive post-flop betting.

Chang needed a Six, a Four or any Club to double-up into a substantial chip lead, while Hao Chen needed to avoid those cards to become Macau Millions Champion. The dealer burned a card and then turned over the K♥ – inciting a huge roar of approval from the rail supporting Hao Chen – the winner of the 2014 Macau Millions.