Tony Hallam admitted not knowing what to say during the presentation of his winner´s trophy for taking down Leg 5 of the Genting Poker Series in Stoke on Sunday. 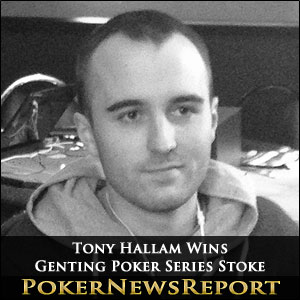 Tony Hallam admitted not knowing what to say during the presentation of his winner´s trophy for taking down Leg 5 of the Genting Poker Series in Stoke on Sunday.

Incredibly Hallam, who had travelled up from Bournemouth for the event, managed to negotiate the final table without eliminating anybody (except eventual runner-up Jon Alley) after starting the conclusion to the GPS Stoke Main Event as the second shortest stack.

Hallam´s hot run included two significant double-ups before the heads-up began, and another dramatic game-changer when the tournament was two-handed, and one of the most sensational climaxes to a Genting Poker Series Main Event – culminating with a winning hand which he was 93% likely to lose!

415 players entered the GPS Stoke Main Event over two opening days on Thursday and Friday. By the close of play on Day 2, only seventeen players remained; and these were whittled down to a final table of nine after overnight chip leader – Jon Alley – had bust out Phil Duffey in eleventh place and David Keay in tenth place to take a stack almost twice the size of his closest opponent to the final table.

Forty-five minutes of Level 24 (blinds 15,000/30,000 – ante 4,000) were left when the players took their seats at the final table, and during the remainder of the level both Nick Ramsey and Tony Hallam managed to double their stacks – both against Justin Devonport. Maurice Nicholson was reduced to the short stack after running his Q♠ Q♦ into the K♥ K♠ of Gabriel Tuna in Level 25, and Nicholson was eventually the first player to bust from the final table when his flopped two pair (Q♦ J♦) was out-flopped by Justin Devonport (K♦ 10♥) who hit the nut straight.

Ramsey and Devonport Bow Out

Jon Alley increased his chip advantage further still with the elimination in sixth of Tom Seaman (A♥ Q♣ > J♣ 10♠) and Ray Power made his first significant impact on the tournament when busting Gabriel Tuna in fifth A♠ K♣ (flopped trip Aces) > Q♥ 7♠. Trip Aces also featured in Tony Hallam´s next double-up A♦ 2♣ against the 9♦ 10♣ of Jon Alley and, as the game went four-handed, Tony Hallam had moved from nowhere into the chip lead.

Tony Hallam´s chip advantage was only temporary, as Jon Alley found A♦ A♣ to bust Demetris Theophanous (2♦ 2♥) in third, but then Tony Hallam jumped back into pole position with trip Queens besting Alley´s top pair of Kings. Again Jon Alley took the chip lead when relieving Ray Power of his last 2 million chips 3♦ 3♥ > A♦ 2♣ and, as the game went into the heads-up, Jon Alley had a lead of 6,220,000 chips to Hallam´s 4,650,000 chips. It was at this point that a deal was agreed in which each of the players would take £30,000 and leave £4,360 to play for.

However, the game was far from finished, and two double ups by Jon Alley but him back in a challenging position – indeed he looked favourite to make it three double-ups in a row and take the chip lead again when getting all-in with A♣ K♦ against Tony Hallam´s A♣ 7♦. Hallam had only a 25% of winning the hand when the cards were on their backs, and this reduced to just 7% after the Flop and Turn of 4♥ A♥ Q♣ / 6♦, but the 7♣ spiked on the River to give Tony Hallam victory in the GPS Stoke Main Event and leave him lost for words.

The 415 players who entered the £400 buy-in NL Hold´em GPS Stoke Main Event smashed the £100,000 guarantee and the top 42 players were rewarded with a cash of £895.00 or better. Those who made the nine-handed final table collected at least £3,325, with the full final table payouts as follows:-