Hall in charge as WPT Championship down to last 15

The 220 entrants have been whittled down to just 15 at the World Poker Tour Championship’s $25,000 buy-in event after four days’ play at The Bellagio in Las Vegas. 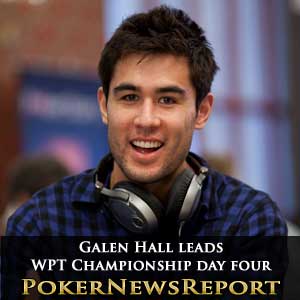 The 220 entrants have been whittled down to just 15 at the World Poker Tour Championship’s $25,000 buy-in event after four days of playing poker at The Bellagio in Las Vegas.

American Galen Hall, this year’s PokerStars Caribbean Adventure (PCA) champion, leads with 3,438,000 chips, which is more than twice the average.

In all, 27 competitors cashed once yet another American, Hafiz Khan, saw his pocket aces cracked. Khan went all-in pre-flop, but was incredibly unlucky to be outdrawn by the pocket jacks of Justin Young.

Right at the bottom of the remaining players is defending WPT champ David Williams, who will have to produce a wonderful fifth day if he is to make successive final tables as he only holds 15 big blinds with 318,000 chips.

The Texan, however, is determined to retain his title, saying victory is his “goal”. But the 30-year-old knows he has his work cut out and admitted that “it’s really tough to win back-to-back tournaments these days”.

Still, he believes “it would be really something” if he were “to accomplish that at one of the most prestigious events on tour”.

With just 15 players left in, it’s unlikely the three more days of play still available will be required. In fact, with any luck, the last six will manage to get in a rest day before Friday’s televised final table in the Fontana Lounge of The Bellagio.

It is expected that five levels will be played on day five, although tournament organisers may extend that if the final table of six is close to being decided.

The British trio of Roberto Romanello, Sam Trickett and Dave ‘DevilFish’ Ulliott all crashed out during day four of the event. They were joined by the likes of poker legend Doyle Brunson, Ukraine-born American Yevgeniy Timoshenko – a former WPT Championship winner – and American Jon ‘Pearljammer’ Turner.

Meanwhile, the controversial Ali Tekintamgac also left without cashing – much to the delight of many of the other entrants.

The German has been accused of cheating at several live European events, but was unable to recover from seeing his Ah-10c beaten by Brunson’s Kd-Qd.

The flop came Ad-10d-4h to give Tekintamgac top pair, while the turn of 8c changed nothing. However, a 7d on the river gave 77-year-old Brunson a flush to leave the German with just 5,000 chips – or one small blind.

Tekintamgac, of course, went all-in the following hand with 9c-8c. However, he faced Kwinsee Tran’s Ad-10d and, with a board of Kd-7d-5c-8h-2d, the German was knocked out in 37th.

All the remaining players for day five are guaranteed $53,095, but that prize jumps up to a minimum of $225,654 for the six final table entrants.