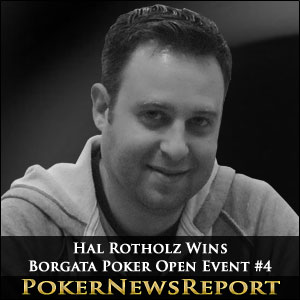 Event #4 of the Borgata Fall Poker Open Series was a $500.00 buy-in two-day Omaha Hi/Lo tournament which attracted eighty players and created a prize pool of $36,000. With such a small field, only the top nine were due to cash in the event and, at the end of Day 1, thirteen players were still involved in the tournament – lead by Leonardo Palermo.

Palermo maintained his lead when the final table was set, but the gap between him and the remainder of the field had been reduced – particularly by Hal Rotholz – after the four shortest-stacked players that started the day had failed to improve on their positions.

With the bet limits at 10,000/20,000 (Level 18) when the final table got underway, it took just ten minutes for short-stacked Dan Shapiro to bust from the event in ninth place, and he was followed from the final table ten minutes later by Arthur Mitchell, who had lost the last of his chips to Hsiao Liu.

Liu was also responsible for the quick elimination of Menachem Rosenberg in seventh, but Dan Hofer put up a commendable fight with his short stack until he was bust in sixth during Level 21 (limits 16,000/32,000).

Hsiao Liu then leapt into the chip lead with the elimination of Robert Lynch in fifth, after Lynch had got the last of his chips in on a flop of A♠ K♦ 2♠ and missed all his outs, while Liu (K♠ K♥ J♥ 10♠) had made a set of Kings on the flop which improved to a Spade flush after the Q♠ 5♠ completed the board.

Going into four-handed play, Liu had chipped up to more than 600,000 chips, while Hal Rotholz (320,000 chips) had reduced Leonardo Palermo to just 160,000 chips, and Ron Schiffman was hanging on desperately with 80,000 chips – less than three Big Blinds.

It was no surprise to see Ron Schiffman depart in fourth place (at the hands of Hsiao Liu) after getting his last chips in with hope rather than a reasonable chance of winning the hand, and thereafter Liu continued to crush the table – building her stack up to 880,000 chips and commanding more than 70 percent of the chips in play.

Hal Rotholz managed to make some inroads into Liu´s chip lead, and crippled Leonardo Palermo before Liu finished the job to send the former chip leader to the rail in third – Liu´s hand of A♠ Q♠ 9♥ 5♥ making another Spade flush – but Rotholz still had some considerable ground to make up on the runaway chips leader as the bet limits increased to 20,000/40,000.

Despite many of the hands in the heads-up being split between the high pot and the low pot, Hal Rotholz started making the gains he needed to match Hsiao Liu´s aggression. He chipped up considerably when his hand of Q-6-4-2 collected both the high and low pots with just two pairs, and then rivered a King to win a set-over-set hand to take the chip lead.

The two protagonists continued to trade pots until another key hand crippled Liu – Rotholz´s A-Q-10-9 flopping a set of Tens and improving to a Full House on the River – and eventually Liu found herself all-in for her tournament life with A-J-7-5.

The flop of 7-5-4 gave Liu two pairs and the top high hand over Rotholz´s Q-3-3-2, but an Ace on the Turn gave Hal Rotholz the nuts low hand and an Ace-Five straight to collect both pots, and victory in the Borgata Fall Poker Open Omaha Hi/Lo Event.