At the end of Day 4, two big stacks lead the surviving 25 players towards the EPT Barcelona Main Event Final Table – those of Bram Haenraets and Piotr Sowinski. 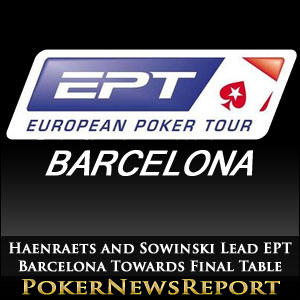 At the end of Day 4, two big stacks lead the surviving 25 players towards the EPT Barcelona Main Event Final Table – those of Bram Haenraets and Piotr Sowinski.

At the top of the “host of unfamiliar names” is Dutch player Bram Haenraets – an employee of Rabobank International in Amsterdam, who is playing in his first ever live poker tournament after qualifying for the event in an €80 satellite on PokerStars. Haenraets has already locked up €40,200 (maybe his bank should put him in charge of investments) and, in a post-play interview, said that he had only one goal in mind – the first prize of €1,261,000.

Haenraets also admitted to experiencing some massive good fortune when all-in in the last level of the day against Nick Rampone. Haenraets had moved all-in with K♥ J♦ on the board of J♣ 10♣ 4♦ / 3♥ and had expected his opponent to fold. However Rampone was sitting on two pairs (J♠ 10♥) and made the call – the K♣ spiking on the River to elevate Bram Haenraets into the chip lead and severely damage Rampone´s aspirations of an EPT title.

Behind Bram Haenraets in the chip counts is Polish player Piotr Sowinski. Sowinski had been there or thereabouts at the top of the chip counts throughout the day, but he too enjoyed a massive slice of luck to keep tabs on the chip leader – calling Markku Koplimaa´s A♠ J♦ shove with a pair of Kings, seeing Koplimaa hitting a three-outer on the flop of A♦ 9♦ 7♠, and then hitting his own two-outer on the River (K♣) to finish the night just one big blind behind Haenraets.

At the start of Day 4 of the EPT Barcelona Main Event, seven former EPT Champions were in the running to emulate Victoria Coren in winning two EPT Main Event titles, but one-by-one six of them hit the rail. Former EPT Tallinn champion Kevin Stani knew his fate early when Pawel Brzeski (A♥ K♥) flopped a King to best Stani´s pair of Jacks, but 2012 EPT Barcelona winner Mikalai Pobol was exceptionally unlucky to be eliminated with A♦ K♥ after the flop of A♠ K♣ 2♠ – Samuel Phillips (4♣ 4♠) finding the 4♥ on the Turn to eliminate the former champion in eighty-fifth place.

Mike McDonald and Davidi Kitai both fell to Bram Haenraets; and both times Haenraets had pocket Aces – McDonald getting the last of his chips in with pocket Sevens, while Kitai got all-in with A♠ K♦ and missed his gutshot draw after the flop of 10♦ 10♣ J♥. Martin Finger also fell to pocket Aces – this time at the hands of Kiryl Radzivonau when Finger moved all-in with pocket Queens – while Robin Ylitalo was sent to the rail in more conventional circumstances – his K♦ 10♦ failing to find the necessary improvement to best Nick Rampone´s A♣ Q♣.

Only Dominik Panka (1,705,000 chips) remains from the seven former EPT winners that started the day, and he was fortunate to remain alive in the tournament more than once. Panka´s first stroke of luck came when he was all-in pre-flop with K♥ Q♦ against Andrey Shatilov´s J♦ J♥. The K♣ on the River enabled Panka to double up, and a few hands later Panka again spiked a King to eliminate Johan Soderberg K♥ K♦ > 8♣ 8♠ after Soderberg had flopped a Full House of Eights over Aces. With luck like that, Panka could still be a contender against Haenraets and Sowinski!

Looking Ahead to Day 5 of the EPT Barcelona Main Event

The goal for Day 5 of the EPT Barcelona Main Event is to reduce the twenty-five players remaining in the event to a final table of eight. With blinds increasing to 20,000/40,000 (ante 5,000) when play resumes at the Casino Barcelona, the average stack is 44.875 big blinds (average stack is 1,795,200), so there should be plenty of action at the tables. Nick Rampone is the player most at risk with 520,000 chips after his last-level bad beat against Bram Haenraets, while Haenraets and Sowinski are the only players with more than 100 Big Blinds sitting in front of them.