Israeli poker player Shahaf Hadaya sprung to the top of the leaderboard after the bubble burst in the PokerStars.fr-sponsored EPT Deauville Main Event. 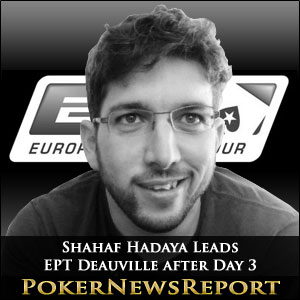 Israeli poker player Shahaf Hadaya sprung to the top of the leaderboard after the bubble burst in the PokerStars.fr-sponsored EPT Deauville Main Event.

Before yesterday, not many people would have heard of Shahaf Hadaya. Ranked 46th on the all-time money list of players from Israel, Hadaya´s contribution to international poker consisted of a final table appearance in a WPT Merit event in Cyprus, a handful of minor cashes in the Venetian´s “Deep Stack Extravaganza” and a third place finish in the Full Tilt Poker Spanish Series in Barcelona in 2011.

However after yesterday´s events at the Deauville International Centre, Hadaya has locked up a quarter of his lifetime earnings – and has the promise of more to come. One of only two players to breach the 1 million chip barrier, Hadaya has an advantage of 187,000 chips (23 big blinds) over his nearest rival – France´s Matthieu Herve – and a further 49 rivals behind in pursuit of the €770,000 ($1.04 million) EPT Deauville Main Event first prize.

A Long Bubble then Boom and Bust

A full two levels of play passed while the field of 155 players who started Day 3 was whittled down to the 120 who would cash in the event. Along the way we lost Ana Marquez, Dermot Blain, Todd Terry and the unfortunate Vanessa Rousso (QQ < A8), but an incredible seven short-stacked shoves held before Said Basri (K♠ Q♠) moved in with his last 10,500 chips and found three callers. The brilliantly named Yury Gulyy (10♠ 10♦) was ahead for most of the hand until David Susigan (A♠ 5♠) spiked an Ace on the river to win the hand and burst the bubble.

Thereafter carnage ensued. Whereas it had taken two and a half hours to eliminate 35 players, the next two levels would see 52 players leave the game and join the queue at the cashier´s desk for their cheques. During this period we lost the last of the Team PokerStars Pros Matthias de Meulder, Day 1B chip leaders David Ostrom and Casey Kastle and Day 1A chip leader Jesper Feddersen – indeed, it was Feddersen who stacked up the current chip leader Shahaf Hadaya.

PokerStars qualifier Feddersen (6♦ 6♣) unloaded his 280,000 chip stack onto the table by betting each round on a board of 8♦ 10♠ A♣ / 2♠ / 8♣. Hadaya followed him all the way to the river and turned over A♠ Q♥ on showdown to rake in a half million chip pot. Despite losing some of his stack soon after when his A♥ Q♣ this time failed to connect against Franck Kalfon´s J♣ J♠, Hadaya went on to bag up 1,237,000 chips at the close of play.

The Brits are Coming (Part 2)

Yesterday on PokerNewsReport, we commented on how well British poker players were performing in the EPT Deauville Main Event and, despite losing EPT Loutraki winner Zimnan Ziyard shortly before the end of the day´s proceedings, Sam Grafton, James Mitchell and Matt Frankland all finished Day 3 strongly to hold good positions among the final 51 players. Lucas Reeves and Gordon Huntly are still involved in the competition and will hope to make it into the penultimate day tomorrow.

An interesting statistic is that UK poker players made up only 5% on the entrants to the EPT Deauville Main Event, whereas they now comprise 10% and control 14% of the chips in play. French poker players accounted for 49% of the tournament entries, now have 37% of the remaining entries and account for only 35% of the chips in play. Were it not for Matthieu Herve forcing both Sam Grafton and Matt Frankland to drop out of a half-million chip pot on the last hand of Day 3, those figures could favour the British even more!

When play resumes at the Deauville International Centre, a few hands will remain in Level 19 (blinds 4,000/8,000 ante 1,000). Play is expected to continue until the remaining field of 51 is reduced to 24, and the table draw for the days play has thrown the two chip leaders together on Table 6. The next player out will collect €13,500 for their efforts and, with only 92,000 chips in front of him, the leading contender to be first at the cashier´s desk in Finland´s Markus Ristola.