Guy Webster took control of the Boylesports International Poker Open in Dublin yesterday, but will have to wait until November 26th. 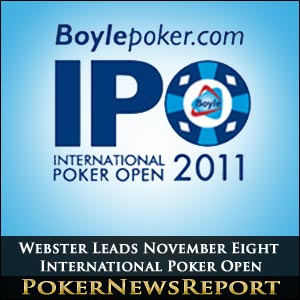 Manchester’s Guy Webster took control of the Boylesports International Poker Open in Dublin yesterday, but will have to wait until November 26th to see if he can overcome his first major live final table.

The International Poker Open has this year followed in the footsteps of the World Series of Poker and Partouche Poker Tour by delaying the final table of its feature tournament until November, and Guy – and his seven remaining opponents – now have a five week wait until the winner of the €51,356 first prize will be determined.

A Poker Tournament for Everyman

While many of the world’s most high profile poker players were larging it up on the Italian Riviera at the EPT San Remo, those with a more modest bankroll were testing their live poker skills at the Boylesports International Poker Open in Dublin. 1368 players paid the €225.00 buy-in, beating last year’s entry of 1292 and creating a prize pool of €273,600 – not quite up to the massive amounts of money changing hands in London, Cannes and San Remo recently, but consequently the International Poker Open is a much friendlier event.

Narrowing a field of this magnitude down to the final eight takes time. Players started with 15,000 chips and a clock of 40 minutes on the two Day 1s (Friday and Saturday), but because of the 60 minute levels on Day 2 (Sunday), play concluded at 2.30am. Guy Webster’s ascension to the top of the leaderboard came courtesy of a shove by Paul Purcell (A♠ Q♥) against Guy’s A♣ K♣ when the tournament was down to the last two tables. Paul Purcell survived to make it into the final eight, and Guy will not have things entirely his own way when play commences in five weeks time. Seated directly to his right will be Rik Snoeyinh from Denekamp (Netherlands) who busted out Declan Lueng (A♠ Q♥) with pocket Kings on the last hand of the night to take a close second place.