On his way to the upcoming Aussie Millions, Gus Hansen stopped off in Macau to play cash poker in Macau’s Big Game, finishing his third 24-hour marathon session with a huge profit of $3.8 million. 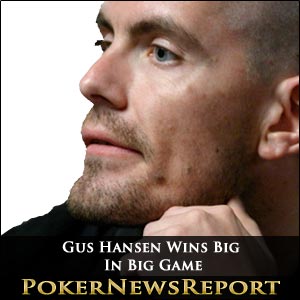 On his way to the upcoming Aussie Millions, Gus Hansen stopped off in Macau to play cash poker in Macau’s Big Game, finishing his third 24-hour marathon session with a huge profit of $3.8 million.

The famed Big Game at StarWorld Macau’s Poker King Club has been running for a few weeks and features blinds of $1,300/$2,600 in U.S. dollars. In addition to wealthy Asian businessmen, other players recently found seated at the Big Game table include top pros such as Phil Ivey, Sam Trickett, John Juanda and Andrew Robl.

Hansen wrote about the Macau action in his blog and was surprised when his fellow players continued playing hour after hour, seemingly never needing to rest or take a break.

“Maybe I am just getting older but I never thought I would see an entire group outlasting me at the poker table,” Hansen blogged. “These guys have stamina like marathon runners. Session after session they keep on going and although I tried to hang with them for a while, I was so tired in the end I had to throw in the towel, give up and go to bed.”

The 37-year-old Hansen deserves a good night’s sleep after enjoying such a huge win. The Danish pro won the Aussie Millions Main Event five years ago, outlasting 747 players to take home $1,500,000 in Australian dollars. The former youth tennis star and world class backgammon player wrote a book following his Aussie Millions victory called ‘Every Hand Revealed” that detailed many of the hands played in the 2007 event.

Hansen had nothing but praise for the Big Game in Macau, enjoying the ambience of the poker room as well as the attitudes and conduct of his fellow players.

“The game is very well organized by Poker King Club manager Mr. Winfred Yu and played in an extremely pleasant environment with good service for all the players,” Hansen wrote. “On top of that, all the players have an unprecedented good attitude towards the game – the game is played in a good spirited way with a lot of laughs and giggles – and a respectful demeanor towards each other and the staff and dealers. I actually think a lot of poker pro’s out there could learn a lot on how to behave at the poker table from watching this game!”

Hansen plans on one more Big Game session before moving on to Australia for the Aussie Millions, which has already begun with preliminary events at the Crown Casino in Melbourne. The Main Event, with a buy-in of $11,400, begins on January 22.