Christmas may be the season of good will to all men, but Gus Hansen´s Twitter defence of Howard Lederer on Christmas Day did not go down well with the turkey. 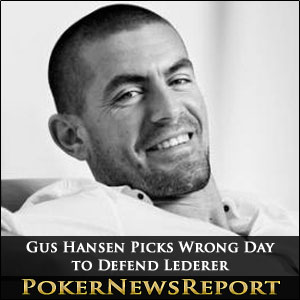 Christmas may be the season of good will to all men, but Gus Hansen´s Twitter defence of Howard Lederer on Christmas Day did not go down well with the turkey.

Maybe we will never know whether Gus Hansen had too much Christmas cheer before sending out a series of tweets on Tuesday in defense of his former Full Tilt Poker boss, but the response to them implies that the “Great Dane” has lost a lot of credibility in his role as a “Professional” for the current FTP set-up.

The three tweets started with a cryptic message Never underestimate stupid people in large groups – explanation will follow! but continued a short while later with If the ‘We hate Howard Lederer’ group would hate on banks and insurance companies, I would have some sympathy- as it is- get a fu**ing grip! Hansen concluded by saying Do people hate Howard Lederer because of evidence of foul play or because Daniel Negreanu and Jason Mercier tells everybody to hate him?

Despite Christmas Day being a relatively quiet day on Twitter, both professional and recreation players were quick to make their feelings on Hansen´s comments public. Kyle Julius – who recently collected almost $50,000 for a second place finish in the Full Tilt Online Poker Series #33 – was one of the first online poker pros to make his feelings known – slamming Hansen you must be an absolute moron. Haha not much more to say than that #growup – while Phil Collins (5th in the 2011 WSOP Main Event) tweeted

Just unfollowed RealGusHansen for supporting the biggest criminal in our industry, Howard Lederer. Good luck with that $2mil downswing bro

One poker player who is never shy from expressing his opinion in these circumstances also made his position clear. Daniel Negreanu stated that a combination of things stemming from HL incriminating himself in the Lederer Files coupled with his arrogance in the video forged his opinion and added as an example of why people might “hate” Howard Lederer him drinking wine and playing in Bobby’s Room while people on the other side of the glass haven’t seen a penny.

Forums Also Have Plenty to Say

There was a mixed reaction to Gus Hansen´s tweets on the poker forums; with the consensus of opinion being that irrespective of whether Howard Lederer was a criminal or grossly incompetent, Hansen was wrong to publicly attack the people who effectively paid his wages for the past decade (online poker players). It was also generally accepted that there was plenty of dislike of Howard Lederer prior to Black Friday and before Daniel Negreanu or Jason Mercier had made any public comment on the situation in which the (then) board of Full Tilt Poker found themselves.

Hansen might not have spread evil all over the world (as did the mythological Pandora), but it could take a considerable amount of time and good PR for Gus Hansen to recover the previous respect he was held in by online poker players all over the globe.