Dynamic Dane Gus Hansen hasn’t been seen at the poker tables of the world much recently – but maybe that is because he has been putting in some serious hours improving his game in the almost unknown sport of racketlon. 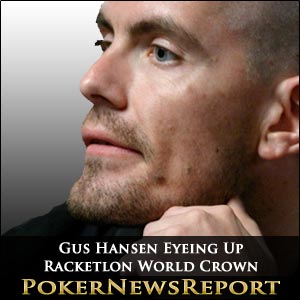 Dynamic Dane Gus Hansen hasn’t been seen at the poker tables of the world much recently – but maybe that is because he has been putting in some serious hours improving his game in the almost unknown sport of racketlon.

Yes, you read that correctly – racketlon. OK, we have to admit that we hadn’t heard of this sport until the other day. But it’s defined as a racquet-sport cousin of the decathlon and triathlon.

As such, it combines the four most popular racquet sports in the world – tennis, squash, badminton and table tennis – in a single match.

You might ask why is such a superstar poker pro giving up as many as five hours every day to this little-known sport? You would, of course, be entitled to be confused by this latest venture from the 2010 World Series of Poker Europe (WSOPE) £10,350 No-Limit Hold’em High Roller Heads-Up champion.

Well, not content with being a major player in the poker world – as well as winning £288,409 for that success last year – the ex-tennis professional has now set his sights on adding the World Cup title in racketlon in just over a year’s time.

Hansen is confident of glory, too, saying: “I can win the World Cup in a year.” However, while he is renowned as an aggressive poker player, the Dane believes he is “more defensive” when it comes to racketlon and “does not take big risks”.

The Monaco-based 37-year-old, who also has three World Poker Tour (WPT) titles to his name, is most definitely taking this task seriously as he puts in more than 30 hours a week in training.

Certainly, if he is as serious about winning this title as it seems, we could see Hansen’s name on another trophy in the near future.

Mind you, he won’t be adding much to his bank account as the winner of the event, to be held in Swedish city Stockholm’s Enskede Rackethall from November 29 to December 2 next year, will only pick up €3,500.

However, Hansen still finds time off from his busy training schedule to get in some poker and is in London right now to take part in the International Federation of Poker (IFP) Nations Cup, which started yesterday.