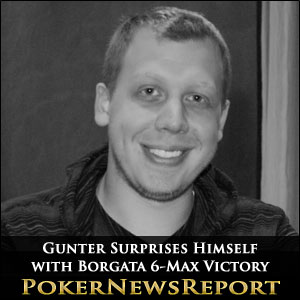 Event #9 of the Borgata Fall Open Poker series was a $250.00 + $30.00 + $100.00 buy-in “Black Chip” Bounty tournament which was played in a 6-Max format and attracted 259 players. Originally, the tournament was scheduled to last for two days, but with the rapid pace of eliminations after the bubble burst around 7.00pm, play continued until just one player remained.

Matt Gunter had been fairly active in the later stages of the tournament after being card dead for the first six levels. He was the first player through the ½ million chip barrier when there were still fifteen players left in the event and, by the time the (seven-handed) final table was set, he had a significant chip advantage over second-placed Rocco Luciano.

Those River Cards Can Get You!

When the final table for the Borgata Fall Poker Open Black Chip Bounty tournament got underway, blinds were 6,000/12,000 (ante 2,000) and one player fell almost immediately. Joe Liberta moved all-in with Ace-King and received a call from Andrew Zhu who had Jack-Ten suited. A Jack on the River was the only card that mattered, and Joe Liberta was out of the Event in seventh place.

Pete Corda then put his tournament life on the line with 6♦ 6♠ and received a call from Rocco Luciano (5♦ 7♦). The flop of A♥ 4♦ 3♠ kept Corda ahead in the hand, but the 6♥ on the Turn completed Luciano´s gutshot straight. Corda was on his feet and ready to leave the table when the 3♦ spiked on the River – giving him a Full House and a valuable double-up.

Luciano Bounces Back – Helps Reduce the Final Table to Three

Luciano bounced straight back from his shock loss against Pete Corda, and bust Ari Engel out in sixth when his pocket Nines held against Engel´s Ten-Seven, before crippling Norm Michalek with runner-runner two pairs. Michalek eventually left the event in fifth place when his King-Queen combination failed to improve past Andrew Zhu´s Ace-Jack; but Zhu´s tournament life was soon extinguished when Pete Corda (Ace-King) flopped an Ace to best Zhu´s pocket Nines.

Corda Falls with the Most Expensive Hand in Poker (*)

For the next two levels of play, the lead changed hands multiple times. Matt Gunter at one point broke away from the Luciano and Corda to take his chip stack above the 2 million chip barrier, but was hauled back into the pack. Eventually one big hand changed the whole dynamics of the event.

Gunter Wins with the Most Expensive Hand in Poker (*)

Matt Gunter took a 2.25 million -v- 1.65 million chip advantage into the heads-up, and although Rocco Luciano was well stacked in terms of blinds, in took little more than ten minutes for Matt Gunter to wrap up victory in Event #9 of the Borgata Fall Poker Open.

In the deciding hand, Matt Gunter (Ace-Queen) opened up for 95,000. Luciano (Ace-Jack) made it 220,000 chips to play, to which Gunter responded by four-betting to 550,000 chips. Luciano moved all-in for his last 1.8 million chips, Gunter made the call and the cards were on their backs.

The board ran A-5-4 / 3 / 7, and Matt Gunter won the Borgata Fall Poker Open “Black Chip” Bounty tournament courtesy of his Queen kicker for his largest ever career poker tournament cash.

(*) Ace-Queen has been recognised as the most expensive hand in poker because it is frequently overplayed. Daniel Negreanu once called it his “1.4 hand” because that was how many millions he had lost playing it, and Doyle Brunson was quoted as saying he would never play the hand again after being bust out of the 2008 WSOP Main Event with Ace-Queen.