Grosvenor Casino´s £250,000 “Goliath” is just over 3 weeks away, and the organisers are looking for teams to compete in the free-to-enter Goliath Team Event. 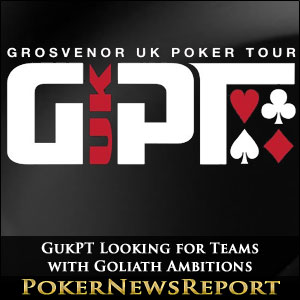 Grosvenor Casino´s £250,000 “Goliath” is just over 3 weeks away, and the organisers are looking for teams to compete in the free-to-enter Goliath Team Event.

In 2013, a new record for a European live poker tournament was set when 2,570 entries for the GukPT Goliath were received over the four Day 1s; and this year – in an attempt to beat that record – six opening flights have been included in the schedule to allow even more players to enter the £250,000 guaranteed event.

In order to add a little extra excitement to the proceedings, the GukPT are looking for teams with Goliath ambitions to compete in the Goliath Team Event; which awards each member of the winning team a personalised trophy, free entry into the 2015 Goliath tournament and free entry into a GukPT 25/25 event of the player´s choice.

Last year´s Goliath was a colossal success – and so busy that the GukPT´s commentator Phil “The Tower” Heald found himself dealing at the tables to cope with the numbers. The tournament was won in sensational fashion by Jake Skidmore, who collected the £56,540 first prize after beating final table chip leader Jiri Sladkovsky in the heads-up.

The success of the 2013 Goliath prompted Grosvenor Casino´s to increase the guarantee from £200,000 to £250,000 – while retaining the same £120.00 buy-in – and extend the online satellites to the event. From Sunday 27th July to Friday 8th August, an £8.80 buy-in re-buy satellite on Grosvenor Casino´s online poker site (at 8:00pm each night) will guarantee a minimum of ten seats into this year´s GukPT Goliath.

Also in 2013, eighty-seven teams took part in the Goliath Team Event – a competition run in tandem with the Goliath, in which teams of between 2-6 players are awarded points for cashing in the tournament. The eventually winners “Team Brighton Boys” pipped local contenders “Why Would You Fold the Nuts” for the kudos of winning the Goliath Team Event, and this year Grosvenor Casino´s are hoping that even more players join forces to compete in this free-to-enter competition.

Full details of how to enter a team can be found of the GukPT´s dedicated Goliath Team Event web page, and obviously there is more chance of earning a higher number of points if you have a six-member team rather than a two-member team; so starting ringing around all your mates and poker pals to see if they will join you up at the G Casino in Coventry´s Ricoh Arena from Sunday 10th August.

Find Out More about the 2014 Goliath

The GukPT Goliath is complemented by a comprehensive schedule of side events which includes a “Battle of the Sexes” tournament, a “Blind Man´s Bluff” event and also a “Tag Team” tournament with further team prizes to be distributed. The full schedule for the 2014 Goliath can be found on the GukPT website and – if you are unable to attend the event – you can keep up-to-date with all the action by following @PokerNewsReport on Twitter.