With half of the six opening flights now completed, the GukPT Goliath is in a good position to set a new record for the largest non-US live poker tournament. 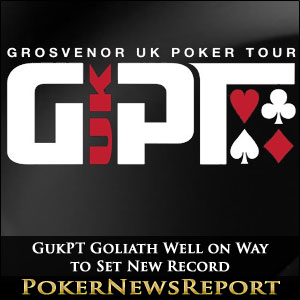 With half of the six opening flights now completed, the GukPT Goliath is in a good position to set a new record for the largest non-US live poker tournament.

Day 1c of the GukPT Goliath was anticipated to be the quietest of the six opening flights for this year´s event, but an incredible 340 players made their way to the Ricoh Arena in Coventry yesterday to bring the running total of entries received for the tournament to 1,133.

With potentially the three busiest days still to come (last year´s final opening flight saw 1,139 entries), there is a strong likelihood that the Goliath´s previous record of 2,570 registrations will be smashed, and the GukPT will once again hold the record for the largest live poker tournament to be staged outside the US – currently 2,732, set at the Beijing Millions less than two weeks ago.

Sixteen levels of action once again took place at the GukPT Goliath on Day 1C, with the chip stacks at the end of the day dominated by Dan Dehenney. Dehenney had a fairly quiet day until the dinner break, but soon after he rocketed to the top of the chip counts, and was recorded with 264,000 chips at the end of Level 11 – increasing to 487,000 by the end of Level 15. Dehenney bagged and tagged 469,500 chips at the close of play – 146,000 chips/24.3 Big Blinds clear of his closest rival Yiannis Lipperis.

Although the hand(s) which resulted in Dehenney´s ascension to the head of the leaderboard went unreported, there were several sensational hands that were. Alan Picken was among the early pacesetters after he won a four-way pot worth 48,000 chips with K♥ K♠ -vs- Simonas Skersys (10♦ 10♠), Ben Goodward (A♠ Q♠) and Anthony Mullins (9♦ 9♣). Picken didn´t even have to sweat his hand, as the cards fell K♦ 3♣ 5♦ / 8♣ / 5♠ giving Picken a Full House of Kings over Fives and sending the other three players to the rail.

Another big hand saw Paul Whitehead bust Mick Corrigan and cripple Lydia Cugudda – Whitehead having moved all-in with A♠ A♣ and receiving calls from both Corrigan (6♣ 6♥) and Cugudda (K♦ K♣). The flop of 6♠ 5♠ 7♥ put Corrigan ahead in the hand, but the A♥ on the Turn gave the advantage back to Whitehead. There were no final twists on the River (3♣) and, for a while Paul Whitehead was up amongst the leaders, while Lydia Cugudda managed a remarkable late recovery to stay in contention for a prize in the £250,000 guaranteed event.

Day 1D should be a busier day than yesterday, with plenty of players involved in the team event looking to take advantage of any opportunities possible to progress to Saturday´s Day 2. Yesterday, Team Blue Blood (Mick Corrigan´s team) did not perform so well, and there was only limited success for a number of teams that made the trip down to Coventry from Sheffield´s Hallam University.

Typically, players who have busted out of the Goliath start re-entering at this stage of the competition (there were 19 previously registered players running again yesterday) and that should swell the numbers as the Goliath approaches the record for the largest live poker tournament outside of the US. Those who will not have to worry about re-entering over the three remaining opening flights include: