Staging two major live poker tournaments at the same time has the potential for disaster, but the Goliath and 6-Max UKPC seem to be complimenting each other. 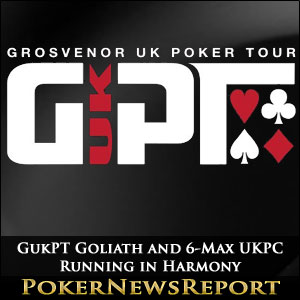 Staging two major live poker tournaments at the same time has the potential for disaster, but the Goliath and 6-Max UKPC seem to be complimenting each other.

It takes little more than an hour to drive from the Ricoh Centre in Coventry when the GukPT Goliath is being hosted to the Dusk till Dawn Poker Club in Nottingham – which is staging the SKY 6-Max UK Poker Championships – and it appears that plenty of players are taking advantage of the good road connections to compete in both events.

Even though the buy-ins for the primary events at each venue appeal to different bankrolls, the appeal of the £250,000 guarantee for the Goliath is tempting players to make the short drive down the M1/M69 from Nottingham to Coventry, while players who have already qualified for Saturday´s Day 2 of the Goliath are heading in the opposite direction to play in the lower buy-in side events at Dusk till Dawn.

Not So Great to Return Empty-Handed

One of the most unfortunate players to make the trip from Nottingham to Coventry yesterday was Dan Muddiman. Muddiman had finished in 48th place in the Sky 6-Max Mini on Sunday night – earning himself £550 and a seat in the £1,000 buy-in 6-Max Championships. A steady first fourteen levels to Day 1B of the GukPT Goliath saw Muddiman in the top fifty players once again, until the cruellest of bad beats eliminated him from the game.

With blinds of 1,500/3,000 (ante) in Level 15, Muddiman moved all-in for 40,000 chips with A♦ 10♣. Neil Evans made the call with 3♠ 3♣ and the two players were off to the races. The flop of A♣ 2♣ K♣ was a great one for Muddiman, and he was a 95% favourite to win the hand after the K♠ was dealt on the Turn. Incredibly the 3♦ spiked on the River to give Neil Evans a Full House, and Dan Muddiman returned to Nottingham with nothing to show for his day trip to Coventry except for an incredible bad beat story.

Partially due to the stream of players driving down from Nottingham, there was another good turn-out for Day 1B of the GukPT Goliath. 251 players joined the action on the second of six opening flights – and despite that number being half of Sunday´s entries, it resulted in a new overall chip leader – Steve Burgess.

Burgess had leapt into a massive lead in a 200,000 chip pot in which his 5♦ 4♦ flopped two pairs (4♥ 5♠ 3♠) against Dale Moulton´s 7♠ 4♠. Moulton had the chance of a gutshot straight, flush draw or higher two pair and was a 51% post-flop favourite to win the hand. However, the 2♦ on the Turn and 10♣ on the River both proved to be blanks and Dale Moulton was eliminated.

Burgess soared up to over 600,000 chips at one stage, but suffered a few knocks to close the night on 502,500 chips – less than two big blinds ahead of Day 1A chip leader Mark Adams. Twenty-seven players progressed onto Day 2 of the Goliath from yesterday´s action in Coventry, with the top ten chip counts being:

Meanwhile, Up at Dusk till Dawn …

Meanwhile in Nottingham, it was a relatively quiet day – but one packed with talent. A top quality field for the £3,000 buy-in High Rollers included Toby Lewis, Matthew Frankland, Matt Perrins and Stuart Rutter, and overseas powerhouses Govert Metaal and Mickey Petersen. The game rolls into Day 2 today, with Anthony Nicholls (392,400 chips) leading Dave Shallow (313,600 chips), Andy Bacon (213,700 chips) and nineteen other survivors towards the £150,000 prize pool.

The result of Sunday´s “Mini” 6-Max Championship was also released (because of SKY Poker TV contractual terms, the final table action cannot be revealed), and it resulted in a win for Mike Cummings. Cummings beat a field of 625 players in the £250 buy-in event – the top 50 players picking up a ticket for the £1,000 buy-in UKPC 6-Max Championships which gets underway today.

Sixty-three players cashed in the event, with those who made the final table in the “Mini” event also being in with a chance of winning a real Mini (car) if they manage to also final table the feature event on Sunday.