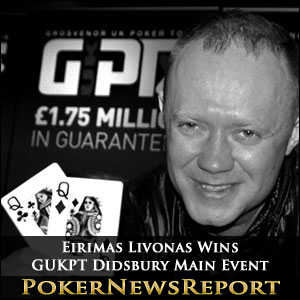 Up until the beginning of April, very few people had heard of Eirimas Livonas (not that many could place Didsbury on a map either – it is just outside Manchester). However, in the space of two weeks, the Lithuanian poker player – who is actually a regular at Dusk till Dawn – has collected the World Championship of Amateur Poker and now the GukPT Didsbury Main Event.

Livonas started the Final Table on Sunday (which was also his birthday) as a big chip leader courtesy of hitting Quad Queens to crack David Joyce´s Aces and then a set of Queens to crack Nigel Ventre´s Aces at the close of Day 2. However, he had the company of some formidable players on the final table; including GukPT regulars Amir Dandanfard, Justin Devonport and Andy Booth.

With blinds starting at 4,000/8,000 (1,000 ante) nobody was in immediate danger, but Yani Yanev was in no mood to take things slowly. In one of the first hands on the Final Table he check-shoved following a post-flop raise from Amir Dandanfard (who snap-folded) and a few hands later bust Matt Davenport A9 > J10.

Andy Booth got a vital double-up against Amir Dandanfard with his Aces holding against Dandanfard´s pocket Tens before Yanev was back in the action once again – crippling Tom Hall with pocket Kings (Hall´s cards were mucked unseen).

Pocket Kings featured in Alex Zeligman´s elimination in eighth – Zeligman shoving his Queens into Eirimas Livonas´ Kings and, after doubling up Ben Windsor (77 > AQ), Dandanfard was the next player to depart when failing to convince Yani Yanev he had a decent hand and his bluff failing against Yanev´s Pocket Nines.

Booth and Hall Go as the Double-Ups Start to Fly

Andy Booth´s double-up against Amir Dandanfard (above) only kept him in the game a little longer, as his pocket Fives failed to improve when Tom Hall (KQ) paired his King on the flop and Booth was sent to the rail in sixth place.

Ben Windsor became a serious contender after finding Aces to double up against Tom Hall (pocket Sixes) and chip up to 740,000 chips and, soon after, Tom Hall was crippled down to his last 60,000 chips after doubling up Justin Devonport AK > A5.

Tom Hall eventually left the game in fifth, when he moved all-in with A3 and despite pairing his Three on the flop, could not improve sufficiently to best Ben Windsor´s Pocket Eights. Going into the dinner break, the four remaining players´ respective chip stacks looked like this:-

Whatever Yani Yanev ate during his dinner break fuelled him up for more aggression. Taking four of the first five hands after the break, Yanev chipped up to over a million chips before eliminating Justin Devonport in fourth with A10 > K9 to take the chip lead.

Yanev was then involved in a remarkable hand which signalled the end of Ben Windsor´s participation. Windsor has shoved all-in pre-flop with K8, and Yanev made the call with Pocket Tens. The flop of 10-8-8 have Ben Windsor trip Eights, but Yani Yanev a Full House. The turn produced a further Ten to give Yanev Quads and a substantial chip advantage going into the heads-up of 1.8 million chips -v- the 1.2 million chips of Eirimas Livonas.

Despite losing the first hand of the heads-up with Pocket Queens against Yanev´s (K4) rivered two pair, it was ultimately Queens – the opening hand which had given Livonas his overnight chip lead – which won the GukPT Didsbury for Eirimas Livonas.

Livonas had chipped up back into contention with a post-flop shove during Level 22 (blinds 12,000/24,000 – no ante) and for the next 90 minutes a ding-dong battle ensued in which neither player took a significant chip advantage. It was only when Eirimas Livonas rivered a straight at the end of Level 23 that he took a3:1 chip advantage, and three hands into the next Level it was all over.

153 players ponied up the £500 buy-in to the GukPT Didsbury Main Event or qualified online. The prize pool of £76,500 was shared among the final 15 players, with those who made it through to the Final Table receiving the following prizes.