Canadian Guillaume Rivet sits on top of the leaderboard with 809,000 chips after two grueling days of the $10,000 Omaha hi-low split-8 or better event of the World Series of Poker (WSOP) in Las Vegas. 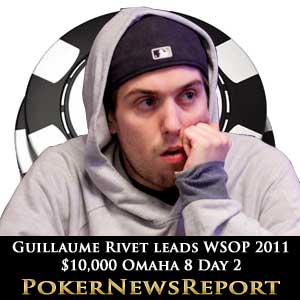 Canadian Guillaume Rivet sits on top of the leaderboard with 809,000 chips after two grueling days of the $10,000 Omaha hi-low split-8 or better event of the World Series of Poker (WSOP) in Las Vegas.

Rivet, from Quebec, started out yesterday alongside 163 other hopefuls – from a starting field of 202 – and ended an exhausting 18 hours spread over two days to hit the top spot from the 22 survivors.

Rivet will, however, have a tough job protecting his chip lead tonight as he strives to collect his first WSOP bracelet as the likes of Michael Chow, Eric Buchman, Richard Ashby, Josh Arieh, Freddy Deeb, Steve Billirakis and poker commentator Mike Sexton aim to add to their own bracelet collections.

Interestingly, the three leaders after day one are all still in with a shot at glory in the Rio All-Suite Hotel & Casino as Fabrizio Gonzalez (147,000) is down in 15th place, Buchman (76,000) sits last and Rivet is obviously top.

In contrast, Russian Mikhail Smirnov, who was fifth after day one, crashed out yesterday, as did Americans Christopher George – fourth after the first session – Marco Johnson (seventh) and Allen Bari (17th), as well as British player James Dempsey, who had been in 36th place on Monday evening.

None of those players made the money, and neither did the likes of PokerStars Team Pros Pat Pezzin, Eugene Katchalov, Vanessa Selbst, Bertrand Grospellier and Daniel Negreanu.

American player Jason Mercier just managed to cash, however, going out in 27th place for $16,329, even though he only held 11,000 chips – about 1.37 big blinds – when the money bubble loomed large.

Instead, it was American Dan ‘djk123’ Kelly that missed out on a cash to gain the ‘Bubble Boy’ title.

With Kelly all-in, it was New York’s Shaun Deeb who took all his remaining chips. Deeb hit a wheel with Ad-3s-5s-9s on a 2h-4s-9c-Qd-5c board to send the one-time WSOP bracelet winner out with no money to show for his efforts in the Amazon Room.

Mercier was joined in the money – and on the same $16,329 cash – by Damjan Radanov in 26th, Raymond Dehkargani in 25th, Amnon Filippi in 24th and Christopher George in 23rd after they hit the rail following the bursting of the bubble.