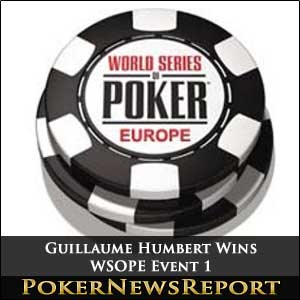 The 26-year-old – who is a part-time online poker grinder – had used some of his recent winnings to enter the event, and had no easy task defeating an international field packed full of quality players from around the world. Among those competing against Humbert were Jason Mercier, Vanessa Selbst, Daniel Negreanu and 11 times WSOP bracelet winner Phil Hellmuth.

All Eyes on Phil Hellmuth

Indeed, as the final day started, all eyes were on Phil Hellmuth, seeking to make up for three massively disappointing seconds in the WSOP series in Las Vegas in June and July, and who had stormed into a clear second position behind Humbert on Saturday evening. As the final twelve players sat down for the conclusion of the NL Hold´em 6 Max Championship, few people anticipated that Humbert would be the last man standing and collect the €215,999 first prize and Championship bracelet.

Hellmuth Starts With a Bad Flop

Unfortunately for Hellmuth, things started badly and got progressively worse. In one of the first hands of the day, Hellmuth (9♠ 9♦) called a 123,000 shove by Adrien Allain (A♣ 10♥) and saw 10♦ 10♣ K♦ dealt on the flop. Within 20 minutes Hellmuth had lost a quarter of his remaining stack to 888 poker player Matan Krakow´s K♦ K♣ and after Adrien Allain had repeatedly taken small chunks of Hellmuth´s stacks with smart raises from position, Hellmuth was eliminated in seventh when his K♠ J♥ failed to pair on the board and came second to Marton Czuczor´s A♣ 4♥.

The Final Table is Set

Despite busting Hellmuth, Czuczor was still the short stack when the final table started. Guillaume Humbert was just above him, with Japanese poker player Azusa Maeda and Hellmuth´s chief tormentor Adrien Allain marginally better off. With half the chips in play between them, Matan Krakow and UK poker player Roy Finlay shared the lead, but it was Maeda who was to quickly take control of the final table – eliminating Czuczor (Q♣ 10♦) when his A♠ K♣ held, and then sending Adrien Allain (K♠ 10♦) to the rail with Q♣ Q♠.

With Maeda bossing the table, the remaining three players flip-flopped positions for a while with never more than 20BBs each. Guillaume Humbert then found a key hand (A♥ Q♥) with which to call Matan Krakow´s shove (J♦ 10♣) and the board of A♦ 7♠ 3♠ / 9♦ / J♠ sent the Israeli to the rail and gave Humbert the impetus he needed to make a serious challenge to Maeda. Humbert took four hands in succession after the break to cripple Roy Finlay (who had qualified for the event via a £220.00 satellite), and Maeda finished the Englishman off when his A♣ 7♣ caught a runner-runner flush to set up the Heads-Up.

Gently Gently Through Heads Up

Despite starting the heads-up at a 600,000 chip disadvantage (Humbert – 1,046,000 /Maeda – 1,654,000), it was the Swiss who was the major aggressor. After an hour of heads-up play – an hour without one hand going to showdown – Humbert had taken a slight lead and then extended his advantage by making a brave call on the river when only holding a flopped pair of sevens. Maeda was not getting the cards to help his cause and, although he tried to be the aggressor, was getting three and four bet by Humbert – whose confidence was growing as fast as his chip stack!

Humbert Flops a Straight for Victory

Eventually Maeda cracked, and shoved his last 600,000 chips into the middle holding 4♦ 3♦ on a flop of 9♣ 6♦ 7♣. His timing could not have been worse, as Humbert showed 5♣ 8♥ for a flopped straight and then, to add insult to injury, the turn 4♥ and river 4♣ gave Maeda trip fours – possibly the best hand he had seen throughout the heads-up! Guillaume Humbert collected his first winner´s bracelet in his first major live tournament and €215,999 to add to his online poker winnings. Maeda, having played so well for most of the day, settles for €133,741. Other major payouts were as follow:-