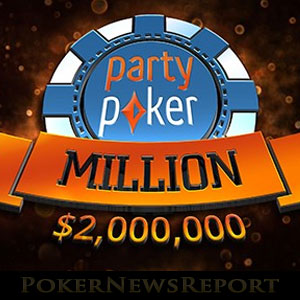 Party Poker has announced that the guaranteed prize pool for the site´s featured event at the Caribbean Poker Party in November has doubled to $2 million.

Back in May, [geolink href=”https://www.pokernewsreport.com/partypoker”]Party Poker[/geolink] announced the site would be taking over the Hard Rock Hotel & Casino in the stunning resort of Punta Cana on the Dominican Republic to host another of its fabulous Caribbean Poker Parties.

The event, scheduled between November 19th and 25th, consists of a week of parties, golf and poolside activities; with two significant poker tournaments thrown into the mix – the WPT Caribbean and the Party Poker Million.

Originally both poker tournaments were guaranteed for $1 million. But, such has been the success of the site´s qualifying promotions, the guaranteed prize pool for the Party Poker Million has now been doubled to $2 million.

How to Qualify for the Caribbean Poker Party

There are multiple ways in which players can win packages to the Caribbean Poker Party including entry into the Party Poker Million event. Every week, Party Poker hosts phased satellite tournaments guaranteeing a minimum of five packages to the event and runs two leaderboard competitions.

The phased satellite tournaments have their own sub-satellite qualifying route that enables players to qualify for the weekly final for as little as $0.01. A similar sub-satellite route leads to a second weekly final guaranteeing a minimum of five seats in the WPT Caribbean (but no flights or accommodation).

The first of the weekly leaderboard competitions is for high rollers who cash in Power Series tournaments with a buy-in of $109.00 or more. Each week Party Poker will award packages to the Party Poker Million to the ten players who have accumulated the most leaderboard points.

Who is Already on the Plane to Punta Cana?

By our reckoning, more than two hundred players have already booked their seat to the Caribbean Poker Party – leaving opportunities for players yet to qualify to have a stab at the one hundred or so $8,000 Party Poker packages still up for grabs.

Known to be heading to Punta Cana in November are leading UK poker player Sam Trickett and Party Poker ambassadors Mike Sexton, Tony Dunst and Carl Froch – who will be playing his first live poker event outside of his home town of Nottingham. Sam Trickett told the Party Poker blog:

The Caribbean Poker Party is going to be a fantastic event, I’m looking forward to going with a big group of friends and it’s brilliant to hear that the Party Poker Million guarantee has been doubled to $2,000,000.

Not Much Time Left to Qualify

Although there are still three months before the Caribbean Poker Party gets underway, time is running out for players who have not qualified for the event. Furthermore, as the event draws closer, there will be plenty of players competing in the qualifiers for the phased satellite tournaments – making it harder to win a prize package.

Our suggested route to the final consists of taking part in the $22.00 buy-in feeder tournaments that are played one hour before each Phase 1 satellite takes place. There are twenty-five Phase 1 satellites each week, so plenty of feeder satellites to choose from.

Players who survive the fourteen levels of the Phase 1 satellites carry their chip stacks forward to Phase 2 – played each Monday at 22:15pm (CET). Five $8,000 packages to the Caribbean Poker Party are guaranteed in each of the Phase 2 finals, but you have to be in it to win it – and soon.