With seven Spanish poker players among the final eight in the PokerStars-sponsored Estrellas Main Event which concluded in Ibiza last night, a home victory was widely expected. 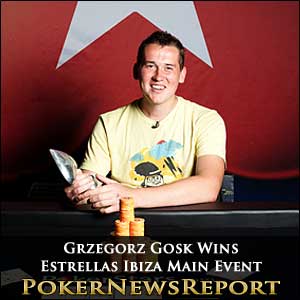 With seven Spanish poker players among the final eight in the PokerStars-sponsored Estrellas Main Event which concluded in Ibiza last night, a home victory was widely expected.

However, nobody had read the script to Polish qualifier Grzegorz Gosk, who broke Spanish hearts with a lightning fast demolition of a quality final table in only his fifth live poker tournament.

Grzegorz Sits Back While Others Fall

Double Up and Bust Gives Grzegorz the Lead

Grzegorz Gosk was more than slightly fortunate in his ascendancy to chip leader. First he doubled up with A♠ 9♠ against Jeff Zsolt Soros, when the 5♠ on the river completed his flush, and then he cracked Raul Paez´s K♦ K♣ when the A♣ on the turn paired the ace Grzegorz held in his hand. Within 30 minutes, Alvaro Santamaria had regained a massive chip advantage with the three eliminations of Manuel Martinez, Jeff Zsolt Soros and Carlos Simon Martinez.

Heads Up between Grzegorz and Santamaria

At the start of the Heads-Up, Alvaro had a 3,895,000/2,375,000 chip advantage over Grzegorz, but within three hands Grzegorz had regained the lead – his J♦ J♥ holding on against Santamaria´s A♠ K♣. Santamaria clawed his way back into the lead when his A♥ Q♥ rivered a flush to master Grzegorz´s two pair, but Grzegorz turned the poker game back in his favour again with Jacks holding on against Santamaria´s Ace high hand.

AQ is often regarded as the most expensive hand in Texas Hold´em, but on this occasion it paid dividends for Grzegorz Gosk. Alvaro Santamaria – down to his last 1.5 million chips – raised 130,000 from the button with A♣ 4♥. Grzegorz responded by moving all in with A♦ Q♦ and Santamaria called. The board ran out 2♦ 7♣ K♠ / 2♥ / Q♥ to give the Pole two pairs, victory in the tournament and the winner´s cheque for €92,100.

A total of 426 players bought in or qualified for the Estrellas Ibiza Main Event, creating a total prize pool of €372,154. The top 50 players cashed and, as well as the winner, a further 17 players in the money had qualified for the €910.00 + €90.00 buy-in tournament courtesy of an online PokerStars tournament.