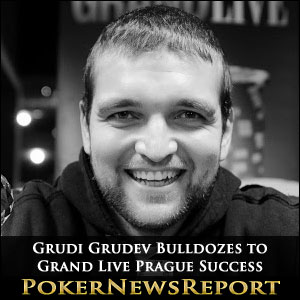 Grudi Grudev won the Grand Live Prague Main Event in the early hours of Sunday morning after a powerful display at the final table which earned him the nickname of the “Bulgarian Bulldozer”. However, for a long time it was not always one-way traffic, and there were some particularly unfortunate hard luck stories among the players that Grudev beat to win the title.

Grudev had come into Saturday´s final table with the chip lead after eliminating Michalis Kouzapas in tenth K♦ K♠ > Q♥ Q♠ in a set-over-set hand, but he faced some tough opposition in the form of US poker player Amanda Musumeci – who had bust out former Day 2 chip leader Mattias Kurschner K♠ K♥ > A♦ Q♣ on the penultimate day to be second in the chip counts at the start of the final table:

Musumeci Down – Dowling and Vekshin Out

As the nine remaining players took their seats at the Card Casino in Prague, there were 47 minutes remaining in Level 22 (blinds 8,000/16,000 – ante 2,000). Amanda Musumeci was the most active of the players during the first level – but it was to the detriment of her chip stack, as she flip-flopped places on the leaderboard with Andreas Panayides, after Panayides has made a brave decision to call Musumeci´s K♣-high River bet with 9♥ 9♠.

The first two eliminations from the Grand Live Prague final table came quickly as Level 23 got underway. Chris Dowling shoved the last of his chips from the small blind with K♠ 10♠ and was bust in ninth when he failed to improve past Grudi Grudev´s 10♣ 10♦, and Timofey Vekshin fell to Jukka Lappi A♥ Q♠ > Q♣ Q♦ when Lappi spiked the A♣ on the River.

Grudi Grudev´s KO of Chris Dowling had moved him beyond 2 million chips, and he extended his lead further still when sensed weakness in Amanda Musumeci´s post-flop raise on a board of Q♥ 9♠ 5♣. Having flopped an open-ended straight draw, Grudev shoved all-in, forcing Musumeci (A♥ K♣) out of a pot to which she had already committed 290,000 chips.

Having already bust one player from the final table with Ace-Queen > pocket Queens, Jukka Lappi repeated the feat against Antti Karkkainen – this time A♣ Q♠ > Q♣ Q♥. The unfortunate Karkkainen looked good to double up on the flop and Turn of 2♣ K♣ 5♥ / 3♠, but the River card 4♦ gave Lappi a gutshot straight and sent Karkkainen to the rail in seventh place.

Roundabout for Rozakis – Nothing for Nielsen

Marios Rozakis enjoyed some mixed fortunes after Antti Karkkainen´s departure – taking 90,000 chips from Grudev in a 4♥ 4♠ > J♦ 10♦ encounter, before doubling up Morten Nielsen Tens > Sevens. Down to his last 12 Big Blinds, Rozakis moved all-in with 7♣ 6♥ and was called by Grudi Grudev J♣ 6♠, but managed to flop a pair of Sevens to double up, and then doubled-up again – gaining his revenge on Morten Nielsen 7♣ 7♠ > A♣ 8♥ to knock the Dane down to his last six blinds.

Nielsen did manage one double-up against Amanda Musumeci – A♥ 9♣ > A♦ Q♥ on a four-club board – but his departure from the Grand Live Prague Main Event in sixth place followed soon after when he ran A♠ 10♥ into Jukka Lappi´s Q♦ Q♠.

Jukka Lappi temporarily moved into the chip lead when taking a massive pot from Grudi Grudev A♦ 8♥ > K♦ 7♦, but it was Mario Rozakis who was ahead at the dinner break, after fortunately doubling up against Lappi A♦ Q♥ > A♠ K♣. All the chips had gone into the middle before the flop of K♥ J♦ 10♦ gave Rozakis a flopped Ace-high straight, but it was looking like a chopped pot after the Q♦ was dealt on the Turn. Incredibly, the 3♦ spiked on the River to double-up Mario Rozakis and give him the chip lead at the dinner break:

Everybody Leads During Five-Handed Play

There was an incredible sequence of action during almost two levels of five-handed play in which every player at some stage held the chip lead. Amanda Musumeci started the sequence by doubling up with K♦ J♠ > Jukka Lappi´s 5♦ 5♠, and then Andreas Panayides took over at the top of the leaderboard after doubling up against Marios Rozakis A♠ Q♠ > 7♦ 7♣. Musumeci went into second place when her 10♥ 10♦ was too good for Rozakis´ Q♣ 10♣, and she then found Aces against Grudi Grudev (A♣ 8♠) to take the lead in the Grand Live Prague.

After four hours of play without an elimination, the Grand Prague Live was concluded in a little over 90 minutes. Amanda Musumeci was the next player to depart after having her stack crippled by Marios Rozakis 4♠ 4♦ > J♦ J♥ (Rozakis flopped a set). Musumeci shoved the last of her chips in with 4♥ 4♦ and was snap-called by Jukka Lappi (A♣ K♦). The flop produced two Kings and Musumeci was bust in fifth after coming from last to first and back to last again in an astonishing sequence of events.

A couple of hands later and Andreas Panayides was to follow Musumeci to the cashier´s desk. Panayides had been playing exceptionally tight, and the blinds (now 30,000/60,000 – ante 5,000) had caught up with him. Panayides moved all-in with A♦ K♥, but failed to connect with the board and was eliminated in fourth place by Marios Rozakis – whose 10♦ 10♥ did not need to improve to win the hand.

Three-handed play started with the final three players having similar sized stacks (around 2 million chips/ 33 Big Blinds each), but Grudi Grudev continually forced Marios Rozakis and Jukka Lappi off of substantial pots and, when Lappi tried to offer some resistance, it signalled his departure from the tournament. Grudev (A♣ 10♦) had raised from the button into Lappi´s Big Blind, and Lappi decided to test the strength of his opponent´s hand by shoving with 3♦ 3♠. Grudev made the call and the cards were on their backs. The flop of K♣ K♦ 4♦ kept Lappi´s pocket Threes ahead, but the 4♣ on the Turn counterfeited the pocket pair and brought Grudev´s Ace kicker into play – Lappi out in third.

Grudi Grudev took a massive 4:1 chip lead into the heads-up against Marios Rozakis, but Rozakis – who had enjoyed a significant amount of luck previously on the day – had a plan, and shoved with every hand to pick up the blinds and antes while Grudev took his time.

Eventually Grudev made a call with A♠ 7♦, but it looked to be the wrong call as Rozakis turned over A♦ K♦. Grudev paired his 7♦ on the flop of Q♦ 4♦ 7♠, but Rozakis had flush outs and an overcard and a live chance of doubling back up into contention. The 10♥ on the Turn added a gutshot straight to his list of opportunities, but his luck abandoned him with the 3♠ on the River, and Grudi Grudev was champion of the Grand Live Prague Main Event.